A TEMPTER’S SNARE: An Old Biblical Story Gets a Fresh Take 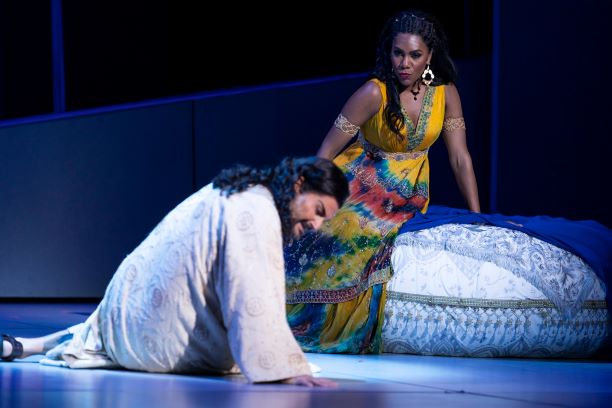 A story from the Bible is probably the farthest thing from a person’s mind when they are looking to take in some scandalous drama.  But in fact, beyond the glorious accounts of Christ’s life and witness, there are other stories that speak to the more human side of things.  On Sunday, Washington National Opera (WNO) mounted its opening performance of Camille Saint-Saëns’ operatic take on the tale of “Samson and Delilah.”  The production itself utilized moderate scenery that was brought out mostly by the dramatic red and yellow of the lighting creating the perfect balance with the regal, ornamented chasubles and robes worn by the principals.

Samson’s downfall was almost evoked by the orchestra immediately as the opening overture was dark and marked by a mysterious undergirding of the drama by the strings.  Standing alone in the center of the stage, as Samson, tenor Roberto Aronica appeared with a foreboding presence as the chorus of Hebrews resounded in cries to the God of Israel.  What was remarkable was Aronica’s ability to emulate the sort of arrogance of Samson as he sang with a more forceful tone in the beginning as opposed to the latter part of the opera where his voice caressed the vocal lines, in many ways showing the true vulnerability of Samson to Delilah’s devious charms.  Conductor John Fiore moved the music along, allowing the three hour opera to be heightened by the orchestra’s punctuation.

Emerging similarly as Delilah, mezzo-soprano J’Nai Bridges was able to convey the beguiling quality of the villainess, not only in the expansive top of her voice, but also in the lower register in which the dark resonance musically heightened the sinister nature of her role.  Together as Samson and Delilah, Bridges and Aronica exuded the sensuous dynamics of the plot, especially in the passionate gem “Mon cœur s’ouvre à ta voix” in which the brilliance of Aronica’s tenor served as a fervent obbligato to Bridge’s warmly placed mezzo.

The production was full of commendable singing throughout.  The powerful bearing of baritone Noel Bouley, making his WNO debut as the High Priest and the dramatic vocal edge brought to the drama by bass-baritone Tomas Tommasson were critical to the excitement that led up to the opera’s surprising conclusion.

Love, lust and deception are all key ingredients of this exciting production.  “Samson and Delilah” continues March 7, 13, 16 and 21st in The Kennedy Center Opera House.