An Evening to Remember: The Music of Brahms Captured a Wide Range of Emotions in Choral Arts Concert Honoring Scott Tucker 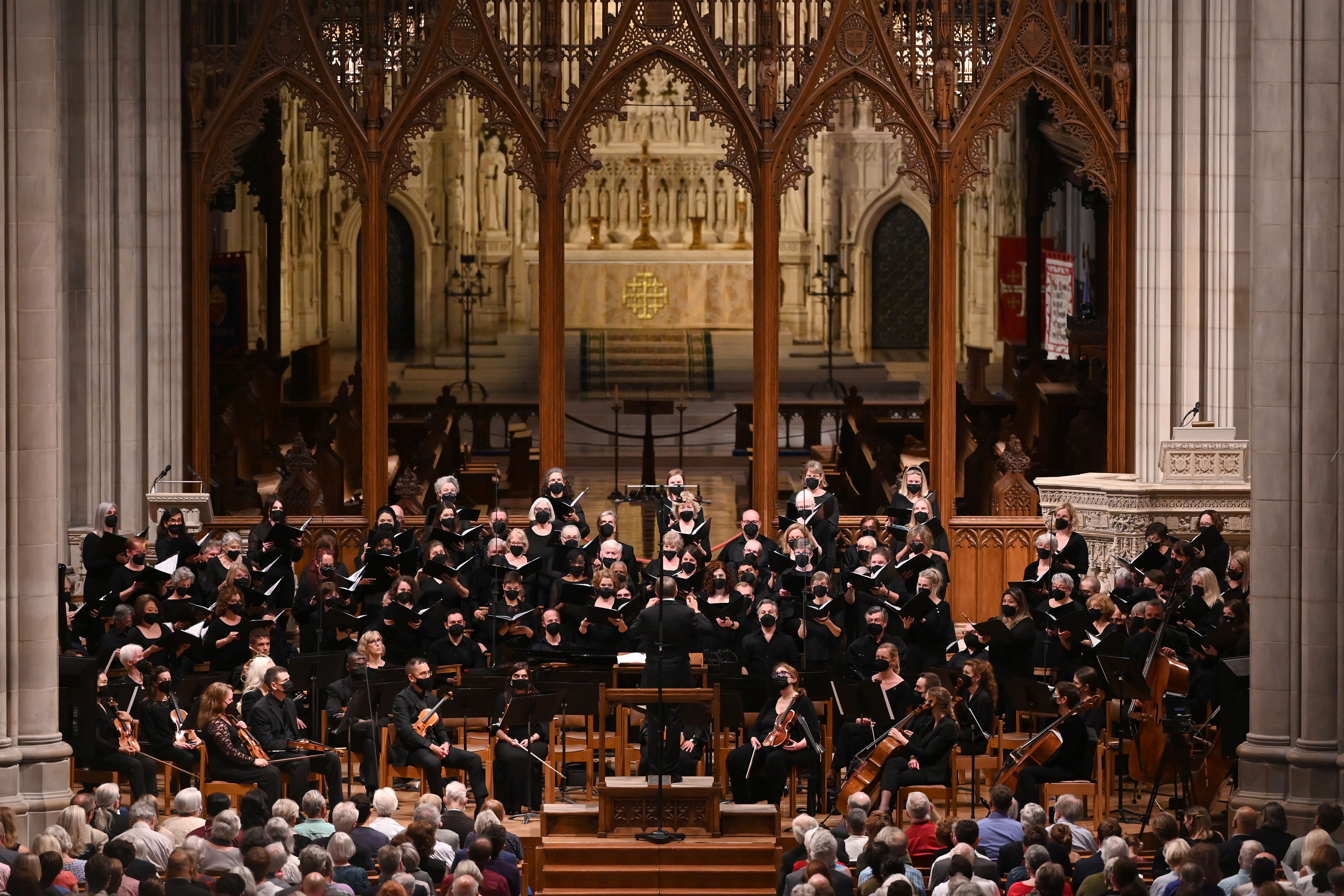 The all Brahms evening presented last night at Washington National Cathedral by The Choral Arts Society of Washington was meaningful not only for its musical beauty, but also its emotional depth.  Aptly themed “The Depth of Joy” the program led by outgoing artistic director Scott Tucker was sentimental for so many reasons.  This final concert with Tucker took place in the very place in which he was ‘introduced’ to the DC music community in 2012 at the end of the glorious tribute concert for Norman Scribner, the legendary Choral Arts Founder who was being fêted on the occasion of his retirement.  It is also worthy of note that the late Norman Scribner’s final concert with Choral Arts also featured Brahms:  his transcendent A German Requiem.  At the end of this month, another important musical choral music titan:  Robert Shafer will mark his last concert with The City Choir of Washington with that very work.

What was remarkable about this concert was that the strides learned during the pandemic were not lost.  It was thoughtful in which Choral Arts made the concert readily available live virtually to audience members who could not attend the concert at the cathedral in person.  This further asserts how the pandemic has caused all arts organizations to pivot, in turn expanding audiences with this virtual component.

The program opened with the beloved “Laß dich nur nichts nicht dauren” (Geistliche Lieder, Op. 30) Often performed with organ, it was wonderful to hear the orchestral accompaniment, especially in the manner in which the strings and voices seemed to ‘sigh’ together in seamless legato.  Continuing in the rich sacred tradition was the familiar motet “Schafe Gott in Mir Gott” from Zwei Motetten, Op. 29. Beginning with the full choir together in rich harmony, the singers evoked the reverence of the text “Create in Me a Clean Heart, O God.”  After centering the initial feeling of awe and reverence, the texture turned more fugal in nature:  with the individual sections of the choir expounding further of the statements of joy, faith and restoration.

There was such variety in this program of Brahms that one may normally would have not considered.  In the “Vier Gesänge, op. 17,” his wonderful of way of ‘marrying’ the voices with the instruments was quite evident with his use of the principal French Horns as they warmly meandered around the sopranos and altos.  Mezzo-soprano Olivia Vote joined the men of Choral Arts and the orchestra for the “Alto Rhapsody, op. 53.”  There was a wonderfully complete voice in Vote’s mezzo-soprano.  She projected as effortlessly in her top register as she did in her bronze colored timbre.  With the rich, dark hue of the male voices, the orchestra and choir were the perfect vehicle for Vote to emote the depth of the Goethe text.

Pianist and associate conductor Brandon Straub accompanied the full chorus in the “Vier Quartette, op. 92.”  With the supportive sweep of the piano, the voices seemed to gently float as if they were being carried gently by the instrument.  Long phrases, varied contrast in dynamics and the feeling of pathos marked the set to its conclusion.

Ending the concert was the elegiac “Nänie, op. 82.”  After an expansive introduction by the orchestra, the sopranos made the initial statement of the theme with the other voices following.  Described as a lamentation on death, the Schiller poem was set to music by Brahms in memory of his friend Anselm Feurerbach.  Under the baton of Tucker, here in particular there was a wonderful balance between the voices and the instruments.  It was almost as if there was a musical expression of the tension between life and death.  As the momentum continued there was an undeniable sense of triumph in its conclusion.

This concert was truly a beautiful bouquet of emotions:  all a credit to Scott Tucker’s unparalleled leadership and musical excellence.

A native of Petersburg, VA, Patrick holds a BM in Vocal Performance from Virginia State University and a MM in Church Music from Shenandoah Conservatory. Formerly the Performing Arts Columnist for Washington Life Magazine, he currently is a freelance writer, publishing articles for several noted publications, including The Washington Post, Early Music America Classical Music Voice North America, The Afro-American Newspaper, CBS Washington and Examiner.com. He is a Board Member of the Music Critics Association of North America, a member of the National Association of Negro Musicians, Inc., The American Choral Directors’ Association, a former member of the Shenandoah University Alumni Board of Directors, the Shenandoah University Black Alumni Network and a Life Member of Alpha Phi Alpha Fraternity, Inc. Just recently he was named to the Dean’s Circle of the Shenandoah Conservatory Advisory Board.  He serves as Organist/Choirmaster at Saint John’s Episcopal Church, Zion Parish in Beltsville, MD and is Interim Director of Choral Activities and Instructor of Music at Virginia State University. Visit http://www.patrickdmccoy.com. Follow him on twitter @PatrickDMcCoy, IG: PDM06. and subscribe to “Across the Arts” on YouTube.

©2022 Patrick D. McCoy: No part of this work is to be edited, reproduced or cited without the express permission of the author.