Christmas With The Washington Bach Consort 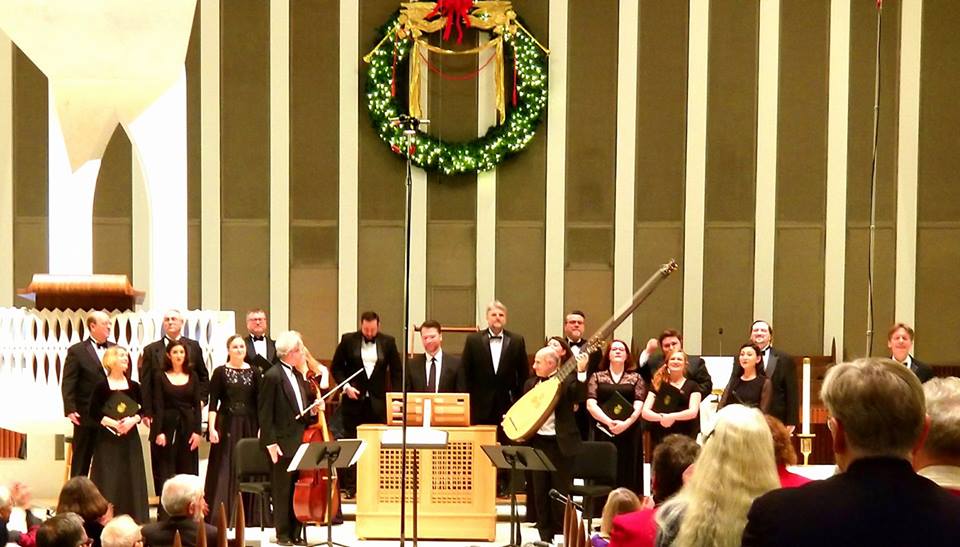 Joyful Exuberance:  Dana Marsh conducted his first official Christmas concert as artistic director and conductor of The Washington Bach Consort in a program of a cappella choral works by Praetorius, Schein, Schütz  and accompanied works by both Johann Ludwig Bach and Johann Sebastian Bach.

There is something very special about hearing the sound of harmonious voices singing at Christmastime.  That spirit was certainly felt on Sunday as The Washington Bach Consort offered a program that showcased the fine singing by the Consort Chorus.  Often, programs of holiday music feature choirs accompanied with instruments mostly throughout.  But this concert took the capacity audience on a journey back in time, beginning with earlier times in which music was expressly written for the voice.  Conductor Dana Marsh was visibly comfortable and able to connect directly with his singers.  There were no instruments to hide behind and that was the beauty of this section of the program.  Beginning the first half of the program was the “Magnificat” by Hieronymous Praetorious.  Soprano Laura Choi Stuart set the tone before each major section of the work.  Familiar melodies hearkened to what most people know today as beloved carols including “Joseph Dearest, Joseph Mine” and “In Dulci Jubilo.”

Joyfully expressive singing singing coupled with the lilting tempo set by Marsh gave the listener a sense of rejoicing.  In contrast, “Quem vidistis pastores” by Johann Schein presented several musical contrasts, from the minor key which conveyed an aspect of longing and expectation to the transition to a more joyful execution with movement in the women’s voices building to a jubilant ‘Alleluia.’  In another work by Schein, the men of the consort shined, specifically the resonant basses anchoring the sound securely.  The ethereal, soaring lines by the sopranos in combination with the warmth of the alto and tenor voices brought conviction to the text ‘Verbum caro factum est’-‘The word was made flesh and dwelt among us.’

Vocal offerings by Heinrich Schütz book-ended the first half of the program, beginning with “Ich bin eine rufende Stimme,” “Tröstet, tröstet, mein Volk,” and “Das Wort ward Fleisch.”  These motets possessed a darker richness that eluded to a feeling of longing.  That was aptly apparent in “Das Wort” which languished in a minor key and then to surprising effect resolved in major-conveying the joy to come.  That aspect of joy had even greater presence in the last Schütz motet “Ein kind ist uns geboren.”  The brisk tempo with the movement of the voices conveyed jubilation, a perfect bridge to the second half of the program.

After the intermission, the consort was joined by continuo instruments: players John Moran, cello, William Simms, and Leon Schelhase, continuo organ.  “Uns ist ein Kind geboren” by Johann Ludwig Bach began this portion of the program and continued the joy that the listener was left with before the intermission.  J. L. Bach was a third cousin of Johann Sebastian Bach and is said to have often performed his works at Leipzig.  The text “For Unto Us A Child is Born” came to life, enhanced by the solid continuo instruments, especially in the fugal section with the voices dancing among each other.  The music by the greatest of all the Bachs:  Johann Sebastian Bach made its appearance in “Von Himmel Hoch.”  Often used as one of the Christmas interpolations in his masterful Magnificat in D Major, 243, it is perhaps familiar to most Bach aficionados.  With each voice entering in succession starting with the tenors, altos, sopranos stating the melody as a cantus firmus then finally entering the basses all joining together.  The ascending and descending vocal lines effectively communicated the heavenly expression of the text-“From Heaven to Earth I Come.”  Johann Ludwig Bach’s followed “Das ist meine Freude.”  The long sustained soprano line in tandem with the repetition of the word ‘Freude’ (joy) reiterated the unspoken theme of the program. ” Komm, Jesu Komm” showcased the consort’s flexibility with tone, offering a more robust sound,with the marked statements of ‘Come, Jesus, Come.’  The split choir formation was particularly noticeable with the voices resounding in alternation with one another.

A program centered around the expectation and joy of Christmas was perfectly constructed.  From the reverent sound of the unadorned voice to the brilliance of instrumental accompaniment, this afternoon of music was almost at its end.  Capping this spirited program was the motet “Lobet den Hernn, alle Heiden.” (BWV 230)  The last time this work was most memorably rendered by The Washington Bach Consort was at the funeral of its founding conductor J. Reilly Lewis.  That rendering was marked by the grief and anguish by such a great loss.  But on Sunday, it was if joy had been restored as the voices and instruments danced under Marsh’s leadership.   Isn’t that what Christmas is about?