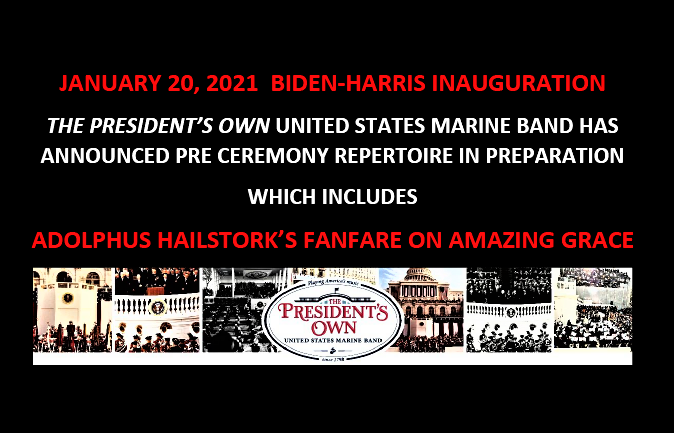 A WELL-DESERVED PRESENCE:  The celebrated composer Adolphus Hailstork will have his music featured at the 2021 Presidential Inauguration.

According to publicist and music historian Bill Doggett, “The President’s Own” United States Marine Band will feature the a special transcription of “Fanfare on Amazing Grace” by the eminent composer Adolphus Hailstork.  Doggett shared in a press release that the ensemble has announced rehearsing a transcription of the beloved hymn setting for performance as part of the pre-ceremony music to be showcased at The Biden-Harris Inauguration on January 20th, 2021.

“Adolphus Hailstork is one of the country’s leading composers. This performance announcement is historic as it is only the second time in American history that music by a contemporary African American composer has been selected to be part of the repertoire performed at a Presidential Inauguration”  Doggett said further.

Hailstork received his doctorate in composition from Michigan State University, where he was a student of H. Owen Reed. He had previously studied at the Manhattan School of Music, under Vittorio Giannini and David Diamond, at the American Institute at Fontainebleau with Nadia Boulanger, and at Howard University with Mark Fax.
Dr. Hailstork has written numerous works for chorus, solo voice, piano, organ, various chamber ensembles, band, orchestra, and opera.