Sunshine and Rain: An Unexpected Delight 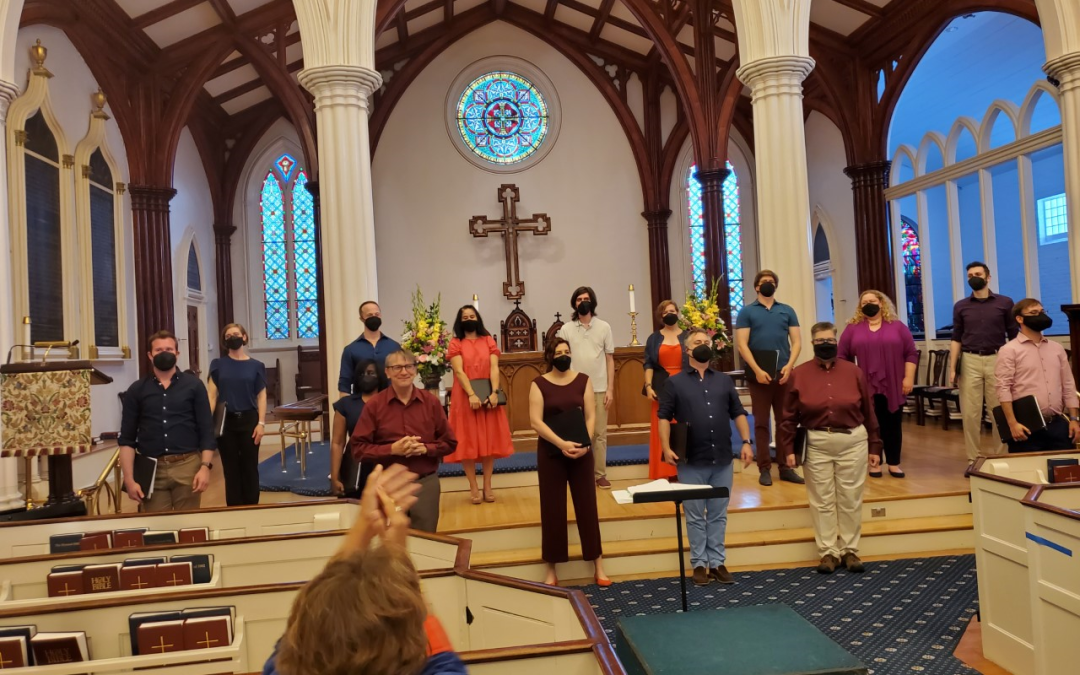 REVIEW:  Originally to be performed in the ‘Secret Garden,’ the outdoor performance space of the Alexandria based Classical Movements, the concert by the Choral Arts Society of Washington Chamber Singers found safe-haven in nearby Saint Paul’s Episcopal Church.

Around this time last year when the COVID-19 pandemic hit, musicians and arts presenters around the world were scrambling.  What would performers due to continue their art and maintain their livelihood?  The Alexandria, VA based Classical Movements who is well-known for their extensive presentation of choral groups and symphonies worldwide was greatly affected with the cancellation of numerous tours.  Yet in the midst of their own financial downturn, they managed to mount an entire summer series of outdoor concerts in ‘The Secret Garden’  housed at their headquarters in historic Alexandria.  The concert by a smaller ensemble from the Choral Arts Society of Washington Chamber Singers under the direction of Scott Tucker would have marked the 61st and 62nd concerts in the garden. Because of the threat of thunderstorms, the decision was made to move the concert indoors at neighboring Saint Paul’s Church. Due to the nature of the a cappella repertoire of the ensemble, it actually worked to the concert’s advantage.

Themed “I Hear America Singing” the program amplified the ‘voices’ of several cultures.  The setting of the “Ave Maria” by the Canadian American Black composer R. Nathaniel Dett began the program.  There was a tight knit sound that was achieved in the wonderful acoustics of the church by the ensemble that perhaps may not have been experienced in the outdoor setting.  Completely masked, each voice part could be heard uniformly, especially the bass section, which anchored the cohesiveness of the work, which was composed in the manner of a motet.  Serving similarly in the role as cantor, soloist Daniel Perkes sang with a smooth, connected tone that is often characteristic of the chant style.  Next on the program were two vocal works from the “Firesongs” by Morten Lauridsen.  This was certainly a wonderful discovery as most people associate Lauridsen with his very popular “Lux aerterna.”  In contrast to the Dett that opened the concert, these ‘Firesongs’ shifted the mood with the long lines, laced with occasional dissonances in the vocal line.  Ironically, it was interesting that Lauridsen’s piece seemed to use the idea of ‘call and response” in the beginning which was often found in the music of the Black sacred tradition. Closing the set was the more animated “Amor Io Sento L’alma.”  As the piece commenced with a sense of rhythmic drive, its ending seemingly peaceful; a proverbial solace after a storm.

A highlight on the concert was the inclusion of works by two Choral Arts members.  The setting of the “Kyrie Eleison” by alto Diedre Robinson added another dimension to the compositional style that was heard in the beginning of the concert.  With the intensity set up by the repetition of the initial ‘Kyrie’ and the harmonic structure of the piece, there was a sense of longing that most have felt during this time: with the pleas of ‘Lord, have mercy.”

Receiving its premiere by the Choral Arts Chamber Singers in 2018, “An Fear Róin” by bass Ryan McCarty was featured on this program.  His use of the upper voices with the melody seemingly dominant was like a narrator telling the story of lonely woman wandering about.  As the piece swelled to its climax, one could certainly feel a strong resolution to the pensive mood established in the minor opening of the work.

“After Spring Sunset”  for many was an introduction to the ‘serious’ compositions of Peter Schickele.  Known more for his alter ego PDQ Bach and his comedic episodes, this piece was definitely an unexpected delight.  Lush harmonies, coupled with legato singing by the voices led by Tucker was certainly a new found appreciation for the composer. “Gamaya” by Paul Rudoi created a feeling of ‘centering’ as the piece had a feeling of constant repetition.  Returning to the music of Dett, the ensemble performed perhaps one of his most beloved anthems “Listen to the Lambs.”

A ray of hope that has arisen during this tumultuous season of social unrest and the pandemic has been the intentional interests in introducing and celebrating often neglected voices in the art form.  Before the pandemic, Classical Movements’ Eric Daniel Helms New Music Program commissioned “Stand Up” by composer B. E. Boykin.  The work honors the life of activist and educator Mary Church Terrell.  Joined at the piano by Brandon Straub, the gospel styled accompaniment further punctuated the articulation by the choir.  A feeling of urgency and the emphatic ending drove the message home of standing up for what is right.  The concert ended with a personal favorite, “I Believe this is Jesus” by Undine Smith Moore.  Moore was nominated a Pulitzer Prize for oratorio “Scenes from the Life of a Martyr”  and is regarded as the ‘Dean of Black Women Composers.’  Without being overly religious, the sentiment of the piece with its buoyant energy was the perfect ending to the concert as the ending text proclaimed “Come and see, come and see.” The totally masked audience did just that and was able to hear and witness one of the many concerts of live music that have continued thanks to the valiant efforts of President and Founder Neeta Helms and her team at Classical Movements.

CLICK HERE FOR UPCOMING CONCERTS IN ‘THE SECRET GARDEN.’