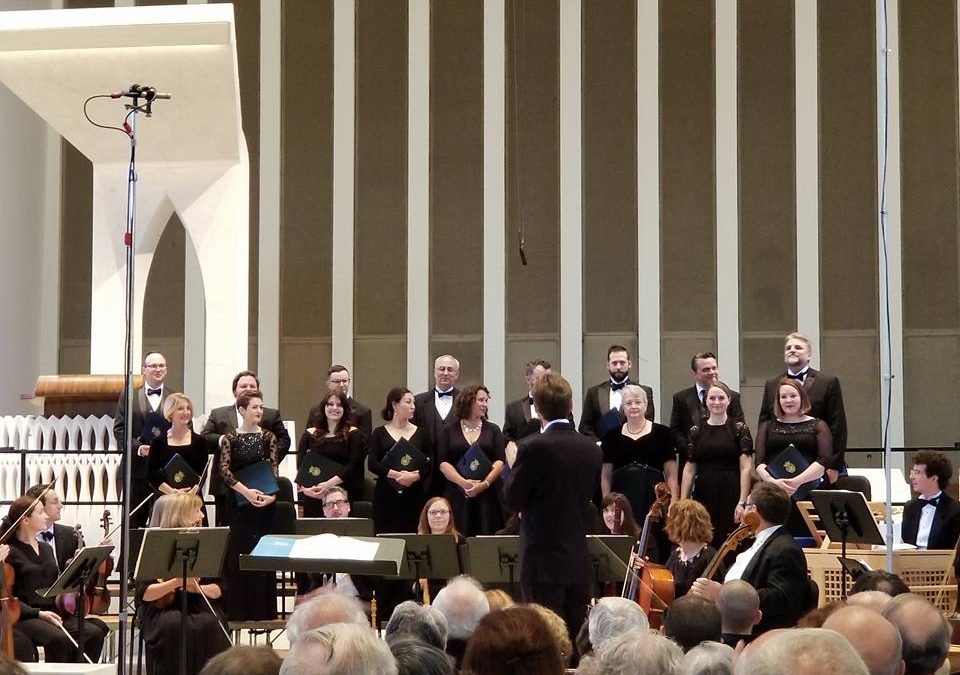 Artistic director Dana Marsh presents a bouquet of flowers to the widow of consort founder J. Reilly Lewis as an expression of love and appreciation.

There were many emotions that wafted in the atmosphere of The Washington Bach Consort’s season opener on Sunday.  A sense of homage to the legacy of the late founder J. Reilly Lewis, the enthusiasm of the audience and the musical scholarship of the new artistic director Dana Marsh, all summoned forth the ‘turning of the page.’  Before the concert officially started, Marsh invited Beth Lewis, the widow of J. Reilly Lewis forward to receive a beautiful bouquet of flowers as a token of  love and appreciation .  Marsh dedicated the concert of works by Bach and Handel to Reilly’s honor and recent birthday. (September 15)

The glorious “Ode for Saint Cecilia’s Day” HWV  76 of George Frideric Handel was book-ended by two equally majestic works by Johann Sebastian Bach.  Opening the concert was the church cantata  “Singet dem Herrn ein neues Lied” BWV 190.  The brilliance of the baroque trumpets, punctuated by the pomp of the timpani set the tone of the festive opener.  Fully engaged with both the singers and the orchestra of the consort, Dana Marsh led with authority, yet with a hint of exuberance that breathed life into the opening chorus.  Full of melismatic passages, the chorus matched the precision of the instrumentalists as they proclaimed ‘Alleluja!”  The vocal soloists of the consort were on full display.  In the alto aria “Lobe Zion, deinen Gott” countertenor Roger Isaacs gave expression to the text “Praise Sion, your God.”  Sung from memory, Isaacs was fully engaged offering depth in both vocal facility, as well as interpretation.  The duet “Jesus soll mein alles sein” was beautifully sung by tenor Kyle Tomlin and bass Steven Combs.  Denoted by lovely, arching phrases, there was a sense of each soloist yielding to the other, coupled with lyrical singing  which made for a wonderful sense of cantabile between the singers.  Bringing the cantata to its ebullient end was the chorale “Laß uns das Jahr.”

Continuing the theme of festivity, the dotted opening of the overture marked the beginning of Handel’s “Ode for Saint Cecilia’s Day”  The stately opening of the overture was briefly interrupted by the animated fugal section.  Returning to the stateliness of its opening, the strings not only showcased their facility in long phrases, but also the execution of quick, precise passages.  Tenor Kyle Tomlin sang with an authoritative delivery, coupled with tasteful dynamics that provided the momentum leading into the four part chorus “From harmony, from heavenly harmony.”  There were several moments that featured the fine solo instrumentalists of the consort with the vocal soloists.  In the aria for soprano “What passion cannot quell”  the legato lines of cellist Doug Poplin set the stage perfectly for the pristine beauty of soprano of Amy Nicole Broadbent.  Likewise, the solo trumpet in the aria “The Trumpet’s Loud Clangor” played superbly by Josh Cohen proved to be a brilliant showpiece for tenor Kyle Tomlin.  The dexterity of the solo tenor’s articulation in the phrase “double, double beat” furthered imitated by the timpani, was the perfect set-up for the chorus that followed.  An absolutely tender musical moment was shared by soprano Amy Nicole Broadbent and flautist Colin St. Martin in the aria “The Soft Complaining Flute.” The long phrases of the pure soprano, alongside the movement of the dulcet flute was truly beautiful.  Bringing the setting of the hymn to the patron saint of music to a majestic close was the chorus “The dead shall live. the living die.”

After the intermission, the final work of the program was the beloved “Magnificat in D Major” BWV 243.  The declamatory entrance of the women’s voices on the word “Magnificat” equally matched by the tenors marked the tone of this beloved masterwork.  Marsh took a brisk tempo which highlighted the facility of both the instrumentalists and the singers. Soprano Rebecca Kellerman offered a jubilant “Et exultavit” which captured the translation perfectly:  “…and my spirit hath rejoiced.”  The bass Steven Combs gave authoritative presence in the aria “Quia fecit mihi magna.”  The standout among the soloists was certainly the countertenor Roger Isaacs who again sang his aria “Esurientes implevit bonus” from memory.  Without the score in hand, there was such an emotive presence matched with vocal execution that was readily heard, as it was felt.  The expansive chorus “Gloria Patri” brought the work to its crowning glory.  With the various voices entering in succession on the opening “Gloria,” the chorus, complimented by the full consort instruments resounded to the work’s end.

A first outing, complete with joyful festive works marked a new beginning with artistic director Dana Marsh, while according the tenets for which founder J. Reilly Lewis was known for:  exuberance and joy!