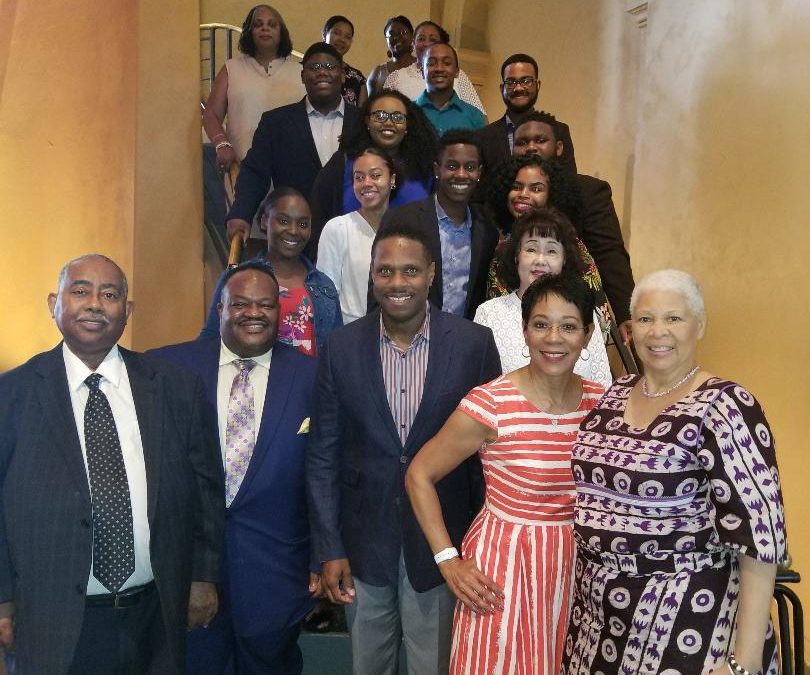 When you get a personal call from a leader in the DC arts community, you know that it is something of great importance.  That was the sentiment of several local arts figures as they were on the other end of a phone call from celebrated musician, producer and arts administrator Nolan Williams, Jr.  Williams, along with his colleagues on The Kennedy Center Community Advisory Board were on hand for a special brunch celebrating this year’s talented class of the Washington National Opera Summer Institute.  The students had the opportunity to interact and engage with several leaders in the DC arts community at a brunch at Thunder Grill, located in DC’s historic Union Station.

Among those present were Kelvin Page, president of the Ben Holt Memorial Branch of the National Association of Negro Musicians, Inc., soprano Angeli Ferrette, representing the Coalition for African Americans in the Performing Arts, celebrated mezzo-soprano and Howard University faculty member Kehembe V. Eichelberger, noted soprano Detra Battle, pianist and countertenor William Jones and Brianna Samuels, a recent Peabody graduate and program assistant for the institute.  Among the students that we found ourselves in conversation with was Preston Jones of Clinton, MD.  A baritone, Jones will be headed to the prestigious Oberlin Conservatory.  Impressive were his role models in the profession which included famed opera singers Lawrence Brownlee and Eric Owens. We had a chance to catch up with celebrated soprano and local favorite Millicent Scarlett-Smith, who was there from the institute’s beginning 15 years ago.  “This is, I believe, my 15th year as a voice teacher at the Institute. I was actually the first voice teacher for the program and had to teach all 30 students. I am grateful that we added two other fabulous teachers, Linda Allison and Robert Cantrell” Scarlett-Smith reflected.  At the institute, the students have the opportunity to prepare operatic repertoire, participate in coachings and masterclasses, culminating in a public performance. Smith added to her thoughts about the program. “I think my most memorable moments, every year, is watching the students find out things about themselves and their singing. They all “improve” in some way. This year, watching the singers support each other, with earnest, has been beautiful to watch. A lot of long lasting friendships are being made.”

The students will perform a program of opera scenes on Saturday, July 13 at 7:00 p.m. at the Katzen Arts Center at American University, 4400 Massachusetts Avenue, NW and a recital on the Kennedy Center’s Millennium Stage on Sunday, July 14, at 5:45 p.m.