HAPPY BIRTHDAY: A Day of Celebration for One of the World’s Greatest Sopranos 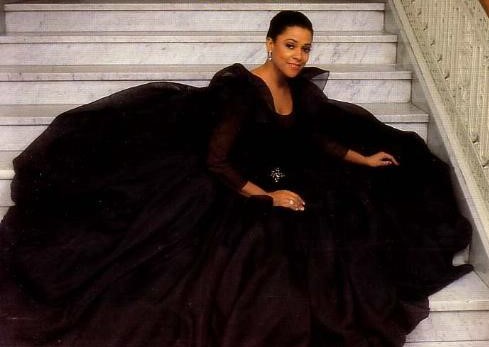 Born on this day 1948 in Portsmouth,Ohio-the internationally acclaimed soprano Kathleen Battle continues to be revered for her beautiful, pure tone, musicality and glamorous stage presence. Today marks the birthday of one of the world’s greatest sopranos-Kathleen Battle.  Her voice has resounded around the world, whether it be from the opera house, concert hall or a popular television awards show.  These days, it is quite rare to find an artist that outstay their critics such as Battle has.  From the soaring notes of her career to the remnants of the musical court of public opinion, Battle has triumphed!  These days, Battle has devoted her talent and artistry to her “Underground Railroad” concert which she musically performs and curates.  This unique take on readings and spirituals has continued to bring her soprano voice before the public in concert halls across the US, as well as Canada.  It’s quite easy to reflect on the shortcomings of an artist but it is gratifying to witness that spirit of redemption.

Of her 2018 appearance at The Kennedy Center, Washington Post Chief Classical Music Critic Anne Midgette remarked:   “Rather than witnessing a memorial to a soprano’s storied past, we got something vital and compelling and very much in the present; and I came away with new respect and admiration for Battle” she stated in her review.

Still an active recitalist, Battle returned to The Metropolitan Opera by invitation for her glorious return in 2016, reprising her “Underground Railroad” program with celebrity flair.  Along with pianist Joel A. Martin, she was joined by Cicely Tyson, Jussie Smollette, Wynton Marsalis, Cyrus Chestnut and Riza Printup.  In 2017, Battle appeared in Japan in recital, presented her program themed “Something to Sing About” which is one of her signature concerts.  This same year, she presented this recital at the Detroit Opera House, capping off the celebration of National Opera Week.

When Battle presented her “Underground Railroad” program at The Kennedy Center in January 2018, we cant help but reflect on the moment that she took to address the audience in terms of how this particular performance came to be.  Even though  she has performed this concert in a variety of halls and with various choirs, this time there was something a bit more poignant.

“I just want to say something. So people have been asking me about this ‘so-called choir’ I don’t think this is any choir that I Soprano Kathleen Battle with “The Voices of the Underground” with pianists Cyrus Chestnut and Joel A. Martin at The Kennedy Center. (2018)

have ever heard. (applause)…I am going to use the term to describe this group as supremely talented and gifted musicians (applause). And how we all came together was last year when I had the invitation to return to a place that I had not been in 22 years…It was my choice about how, what, when, EVERYTHING. So I put out a call to a group of friends, 6 individuals involved, plus myself….and I asked do you have singers, not talking about a choir, I am talking about singers.”

Gesturing over to ‘Voices of the Underground” Battle proudly stated “And this is who showed up!” to great applause by the full house. –Kathleen Battle.

Happy Birthday Ms. Battle!  We continue to celebrate your legendary career and so grateful for the beauty that you have brought to the world!