JUBILEE: The Story of a People Rings Out in Song at Arena Stage 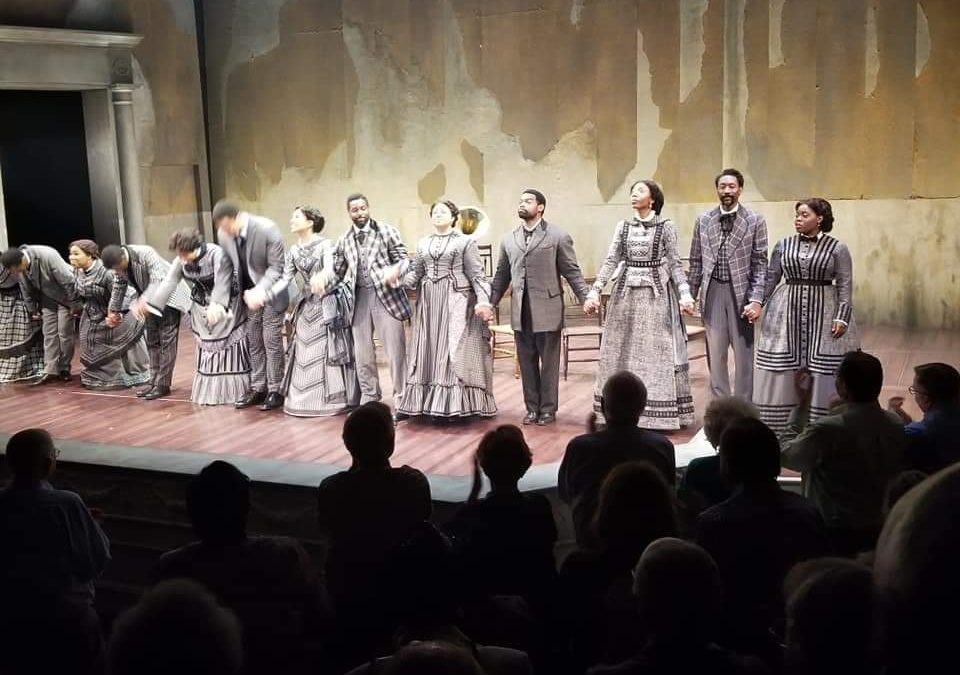 REVIEW:  Now towards the end of its run at Arena Stage, “Jubilee” inspires the power of song through the legacy of the Fisk Jubilee Singers.

If you ever have met person who has attended a historically black college or university (HBCU), you may have heard them share stories of them being touched by or touring with their respective school choir.  The rich tradition of choir tours continues today and fostered today some of our nation’s most celebrated HBCU choirs such as Oakwood University, Morgan State University and Howard University, just to name a few.  But it is in reverence that these institutions should bow to Fisk University, for the choral model of excellence, endurance and fortitude set forth by its now storied Fisk Jubilee Singers.

The Arena Stage production gives a glimpse into the plight of the Fisk Jubilee Singers during a time when people of color used music to truly survive hardship and express their deepest, inner-most thoughts.  Throughout, the audience gets to have a front-row seat into the genesis of the group:  from its reception, trials and finally respect.  Written by playwright Tazewell Thompson, the work explores the journey of the singers through traditional spirituals of the period,  The depth is felt throughout and perhaps gives a nod to Thompson’s own musical and worship experiences being raised Roman Catholic. Positioned on stage in 19th century period costumes, the singers are arranged in the manner of a rehearsal. The leadership of its white chorus master George White, who was also the school’s treasurer was evoked both directly and in narrative form by actress Lisa Arrindell.  Additionally Arrindell who is known to many for her big screen appearances in the movies of Tyler Perry represented the role of Ella Sheppard, the matriarch of the Fisk Jubilee Singers. Sheppard, who taught music in Nashville is credited for many of the arrangements that the original Fisk Jubilee Singers performed.  The embodiment of musical precision and the reputation of the choir’s task master, Arrindell represented the attribute of excellence that sometimes goes lacking in today’s presentations of music that go before the public for consumption.

With any ensemble, there are singers that long to be a star in the firmament.  That rang true in the diva antics of Maggie Porter who wanted to let her soprano voice to be heard in diva fashion.  Portrayed by Aundi Marie Moore, the character yielded a welcomed sense of comic relief to an otherwise probing story of resilience.  Moore played up the diva antics and gave a glimpse into her own larger career as an operatic soprano in a short, but charming vignette of Verdi’s aria “Pace, Pace Mio Dio.”  And then, there were those movingly emotional moments like the spiritual “Balm in Gilead.”  America Robinson, who is still questioning the origin of her name which is supposed to be the representation of freedom for all- is conveyed through Simone Paulwell.  The soprano voice serenely captured the sense of comfort that music was able to communicate during hard times.

The strains of familiar spirituals threaded the entire work together.  Whether is was from the strong ensemble of men headed by the clarion delivery of tenor Travis Pratt or the resonant basses of local favorites V. Savoy McIlwain and Greg Watkins, the strength and importance of the black man in all aspects of society rang out in the midst of trial.

For the spiritual performance practice purists, some of the harmonies sung by the voices in ensemble may entertain the idea of musical authenticity for the time period.  Perhaps, what resonates most with the audience is the plight of the determined Fisk Jubilee Singers.  Even though they experienced disappointments and closed doors, their glorious voices began to be heard around the world, notably before Queen Victoria.