REVIEW: “A Candlelight Christmas” with The Washington Chorus 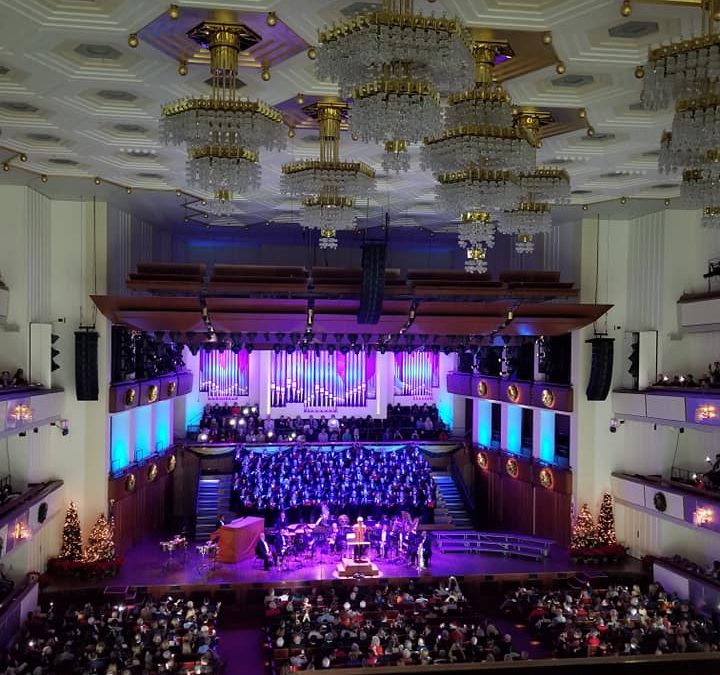 Of Peace and Light:

The Washington Chorus pulled out all the stops in a program of holiday favorites and new discoveries.

On Sunday evening the sounds of the season filled The Kennedy Center concert hall as The Washington Chorus presented its annual holiday offering:  “A Candlelight Christmas.”  There was an energetic presence in the hall as the listeners gathered for an evening that would prove to be one of holiday cheer.  The carol “Once in Royal David’s City” began the journey as a lone soprano voice sang the first stanza a cappella from the stage.  In procession, the choir was then  joined by organist Paul Byssainthe, who added supportive nuance to each stanza.  As the carol grew towards its close, it truly was the organ that projected the voices into the vast hall.

Artistic director Christopher Bell, now center stage added to the festivity not only with his conducting, but also with his dazzling attire, which would change several times throughout the evening.  The forces of the National Capital Brass and the pipe organ added a majestic dimension to many of the familiar carols.  “O Come All Ye Faithful” found the audience in full voice along with the chorus as the hall resounded with the favorite holiday tune.  Bell then led the chorus in the a cappella “Past Three A Clock” arranged by Charles Wood.  Sung with a bounce, the selection perfectly captured the passing of time as the voices moved ahead with a spirited joy.  Returning to a familiar favorite, the chorus sang the classic “O Holy Night” arranged by D. Battiwala.

What would the holiday season be without the festivity of bells?  A special treat was the performance of two carol selections by Virginia Bronze.  Ringing out sounds of Christmas on bells of various sizes, Brian Seemann led his talented ensemble in “Fantasy on a Ukranian Carol” a musical statement of the familiar “Carol of the Bells” and a wonderfully contemporary setting of “I Wonder as I Wander.”  In the midst of the hallmark holiday standards were a few newer compositions.  “I Pray” by Paul Mealor was a tender musical expression of the season spent without a loved one.  With the original melody built around the familiar “Silent Night” the work swelled on the musical statement with the brass and organ then gently resolving with the gentleness of the harp and organ in a state of reflection.  Taking a turn towards the jovial, Bell invited the audience to join in with the chorus in “The Christmas Alphabet” complete with full, synchronized hand motions and gyrations throughout the entire hall.  Continuing the fun was a spirited setting of “Jingle Bells,” again allowing the audience to join in to full abandonment. A contrasting moment came in “Lully, Lulla, Lully” by Philip Stopford.  The serenely beautiful piece possessed an angelic quality as the sopranos particularly soared quietly.    That energy continued as the chorus performed “Christmas Fantasy” a medley of carols which not only highlighted the spirited singing of the choir, but was also a tour de force for organist Paul Byssainthe and the National Capital Brass and Percussion. Together, both forces with Maestro Bell lifted the voices to a state of jubilation.

As a part of its annual “Side By Side” initiative, Bell invited the voices of GenOUT, an youth outreach chorus of The Gay Men’s Chorus of Washington took the stage conducted by Paul Heins.  The group shined in two seasonal selections:  “God Rest Ye Merry Gentleman” arranged by Russell Robinson and “Mid-Winter” arr. Bob Chilcott.  There was an outpouring of support for the chorus as the audience seemed to ’embrace’ the young singers with warm applause.  Then, the program took a turn towards the classic seasonal feel good pieces.  Maestro Bell invited the audience to showoff their linguistic skills as they alternated between German and English in “Silent Night.”

For the last several years, “The Dream Isaiah Saw” by Glenn Rudolph has certainly become a rousing staple of The Washington Chorus’ Christmas tradition.  The moving text from the book of Isaiah was given powerful resonance as the voices, organ and brass moved against the urgency of the percussion.  With several prior performances of Handel’s “Messiah” with the National Symphony Orchestra, The Washington Chorus was particularly in fine form to lead the audience in the singing of his famous “Hallelujah Chorus” from the revered oratorio.  Taking the stage to conduct was Michael Morris, a member of The Washington Chorus for 30 years.

Ending the concert in a fun nostalgic fashion was “Snow Waltz” a cheerful tune that sent the audience out with a smile.  Somewhat bittersweet, the witty, personable Christopher Bell conducted what was his final “Candlelight Christmas” with The Washington Chorus.  Luckily our Christmas gift is a few more appearances by the Maestro as he ‘wraps’ up his final season.