REVIEW: A Royal Occasion with The Washington Bach Consort 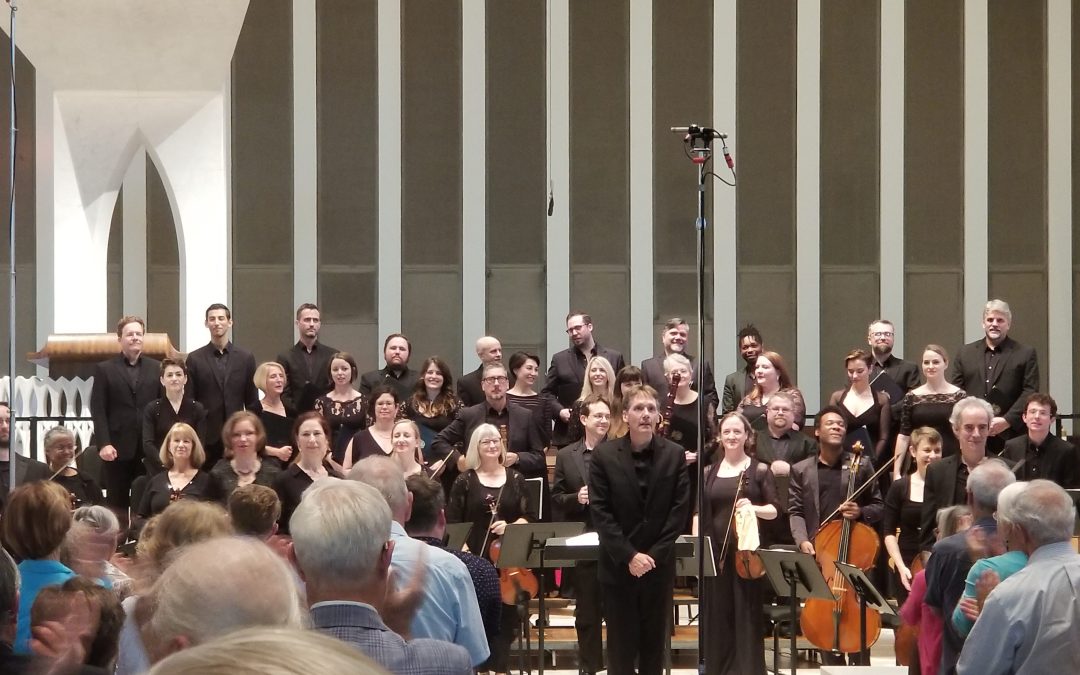 Voices and Instruments of The Washington Bach Consort ushered in the new season with a program of musical grandeur.

When The Washington Bach Consort marked its 35th Anniversary Season with its founder, the late J. Reilly Lewis, it began with a program called “Kings and Commoners.”  As consort executive director Marc Eisenberg shared with the audience at the National Presbyterian Church that the J. Reilly Lewis Legacy Fund had exceeded its 1/2 million dollar goal, one could not help consider how that legacy has been fostered as the consort began its 42nd Season under artistic director Dana Marsh. Seven years ago, the consort performed Handel’s Coronation Anthem #3 “My Heart is Inditing.”  Marsh expounded upon that vision with the performance of all Four Coronation Anthems by George Frideric Handel.

Sunday’s concert began with one of J. S. Bach’s early cantatas, “Gottes Zeit is die allerbeste Zeit” BWV 106.  Beginning with a short sonatina, the recorders of the consort played by Vincent Lauzer and Peter Lim notably set the reflective tone of the work as Marsh led the instrumental forces with a lilting tempo that summoned a spirit of reverence. The cantata alternated between a variety of vocal textures. In the choral movements, the voices of the consort blended well together, not only when they sang the homophonic passages but also in the fugal passages as each section of the chorus executed its musical statement uniformly. There were short solos that were featured throughout. Aaron Sheehan projected into the vast space of the National Presbyterian Church with a bright, clarion tenor with a evenly spun vibrato. Bass-baritone Jonathan Woody sang with authority and exceptional control, exhibited particularly in the quick moving passages of the vocal line. Mezzo-soprano Sarah Issaelkhoury perhaps had the longer of all the solos.  Singing with a rounded warm tone, what was remarkable was the way in which her voice seemed to sustain in the phrases and then grow, especially in the phrase “In deine Hande” with weight placed on ‘du hast.’-into your hands I intrust my soul.  The final chorus concluded the cantata, with the voices and instruments tossing off the fiendishly melismatic passages like child’s play.  A set of ‘Amens’ punctuated with work’s end with the final period added by strings.

The program continued with the “Trauerode” which turned the mood of the occasion to a somber one.  Composed for the funeral of Queen Christiane Eberhardine of Poland/Saxony, this work caused the listener not only to reflect on the adoration of royalty, but also to consider their mortality.  There was a feeling of urgency that was set up by the more dramatic opening by the instruments.  Here, the consort voices sang with a more robust delivery that seemed to communicate the final journey of one’s life; royalty or not.  Margot Rood’s clear soprano soared into the nave of the church. Whether it was the emotion conveyed in the delivery of the recitative or the dexterity in the lines of the aria, Rood in many ways musically offered a picture of solace. A feeling of reconciliation was readily felt as the final chorus concluded the work in a dark minor key.

It was after the intermission where the theme of  “A Royal Occasion” truly resonated with the audience. The splendid “Four Coronation Anthems” by George Frideric Handel held the attention of the listeners from start to finish.  From the build up in orchestra’s introduction to the ebullient entrance of the chorus, the first anthem “Zadok the Priest” with trumpets and timpani lifted the afternoon to new level of festivity.  That was certainly apparent in the thunderous applause that greeted the performers at the end of the first anthem.  In similar fashion, the three remaining anthems followed.  With baroque music, there are always preferences in terms of performance.  One disappointment was in “My Heart is Inditing” in which instead of using the more than capable principal soprano, alto, tenor and bass soloists, the sections of the choir sang the solo lines.  One of the most impressive moments of anthem #3, the use of the choral voices was effective, if not as moving.

For centuries, the presence of trumpets and drums have always marked a royal occasion.  These anthems were the perfect vehicle of consort trumpeters Josh Cohen, Joelle Monroe Dennis, Anthony Ferry and timpanist Michelle Humphries. Their presence was integral to the majesty that was experienced in these pieces   The last of the four, “The King Shall Rejoice”  presented a myriad of emotions.  The opening chorus with its repeated statement of the text as an expression of jubilation.  “Glory and worship has thou laid upon him”  was a stately choral response of adoration, culminating in a fugal “Alleluja” with the full compliment of the orchestra with trumpets and timpani.

From a crown adorned on one’s head to the ultimate crown of life:  the afternoon was indeed the picture of music fit for a royal occasion.