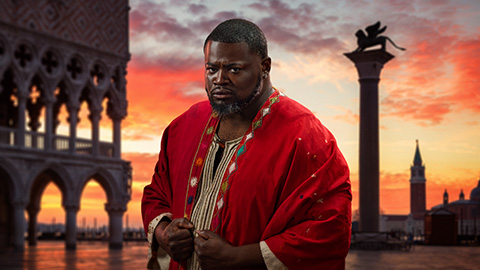 With soprano Leah Crocetto as Desdemona and tenor Russell Thomas as Othello, the age old story of burning desire came to life in this Washington National Opera rendering.

The current Washington National Opera run of Giuseppe Verdi’s opera “Othello” demonstrated perfectly on last Friday night that with all the right ingredients, a plot can blossom when one least expects it.  There was a dark, mysterious aura that enveloped the opening of the opera as the burst of lightning cast down upon the gray hued set.  The love embattled Desdemona appears, standing in the abyss of the stage.  Her lone appearance in many ways foreshadowed the deceit and deception to come as the very people who were cheering Othello’s victorious arrival were also plotting his downfall.  In the title role, tenor Russell Thomas made Othello come to life.  The embattled nature of Othello came through with the strength and vitality in his resonantly clear tenor.  As Desdemona, soprano Leah Crocetto was a convincing force.  Her voice soared with a sense of focused direction that embodied her dilemna ridden character.

Some of the evenings most magical moments came in the solo scenes between Crocetto and Thomas.  As the two appeared together, there was a chemistry that was readily felt.  As their voices intertwined, the momentum was further enhanced by seemingly natural chemistry between the two.  The forces of the Washington National Opera chorus, children’s chorus and orchestra under the baton Daniele Callegari were all a huge credit to the production, providing the dramatic crescendo on which the momentum of the opera crested.

One of the most gorgeous moment of the evening came in the famous “Willow Song:” .  Known famously as Desdemona’s lament, soprano Leah Crocetto brought the listener into her angst:  unleashing a voice of dramatic power, yet with a feeling for Desdemona’s turmoil-exhibited in the pianissimi of the voice and punctuated with the trailing strings at the end.  In the quartet “Un uom che geme” the tragic trajectory of Desdemona and Othello was further heightened by the solid baritone of George Gagnidze as Iago and the warmly robust mezzo of Deborah Nansteel as Emilia. Altogether, the four singers created quite a musically memorable moment.   Rounding out the cast of singers, of notable mention is Zach Borischevsky who gave a clarion vocal edge to the role of Cassio and baritone Hunter Enoch, who delivered with a firm sense of vocal urgency.

The opera closes at The Kennedy Center Opera House on November 16.