REVIEW: “Songs of the Season” with The Choral Arts Society of Washington 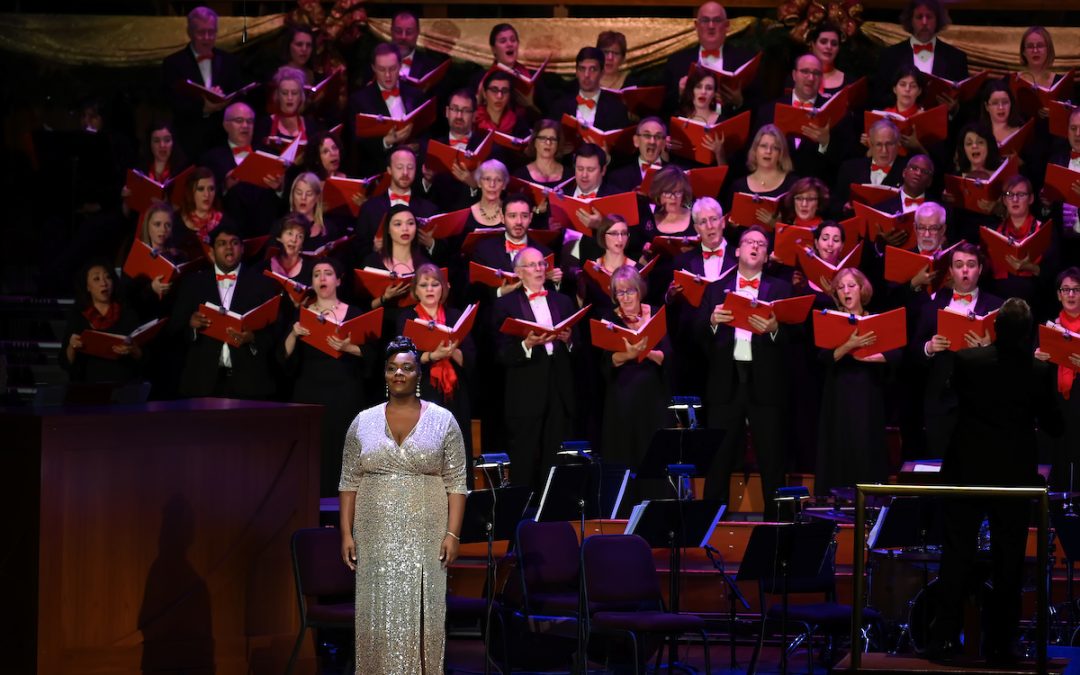 In its annual series of concerts for the holiday, on Monday night The Choral Arts Society of Washington celebrated with its 39th Annual Concert and Gala featuring mezzo-soprano Kristina Nicole Lewis. As one can only imagine, with all of the choirs in Washington, each one has its own way to musically usher in the holiday season.  The Choral Arts Society of Washington has put a unique stamp on the tradition, marking its 39th annual concert and gala on Monday night in The Kennedy Center Concert Hall.  The atmosphere was truly festive from the onset as tailored tuxedos and elegant gowns were donned for the celebratory evening.  This year, the gala was under the gracious honorary patronage of Her Excellency Emily Haber, Ambassador of the Federal Republic of Germany, who was present with her husband Hansjörg Haber.  An important gala for Choral Arts, the event raises over $500,000 for the organization’s performances, as well as community outreach and education programs.

After a prelude of seasonal favorites by the brass ensemble, the house lights dimmed in preparation for a ‘candlelight’ processional.  “O Come, O Come Emmanuel” arranged by Brandon Straub  was a beautifully solemn beginning to the program.  Artistic Director Scott Tucker led the onstage voices and provided the focal point of direction as the additional singers entered from the rear of the hall.  The alternation of the a cappella men’s voices with the women’s voices allowed the traditional advent hymn to eventually build with the arranger at the organ and the brass accompaniment adding to the musical arch of the work. In celebration of the rich German musical contributions, the music continued with “A Joyful Ode” arranged by Scott Tucker.  Perfectly highlighting the cultural theme, the work was a fresh take on Beethoven’s famed choral finale to his “Ninth Symphony.” The concluding verse was particularly thrilling as the voices resounded with a majestic forte, capped by the rousing ending created by the brass and organ.  Mezzo-soprano Kristina Nicole Lewis then joined Tucker and Choral Arts for the beloved German carol “Lo, How A Rose E’er Blooming.”  With the harmonious voices of the chorus, Lewis emerged with a warm, expressive voice that projected confidently with ease.  After a buoyant choral setting of the familiar carol “In Dulci Jubilo” the audience was treated to the Casavant organ as Brandon Straub rendered a setting for organ by arguably the greatest German composer to ever live:  Johann Sebastian Bach.  With the sweeping, contrapuntal lines and marked tempo, the highlighting of the organ in a solo fashion was a welcomed contrast to this section of the program and was well received.  Lewis returned in the solo aria “O Thou That Tellest Good Tidings to Zion” from “Messiah” by George Frideric Handel.  Accompanied by Straub at the piano, the beloved work was performed at a brisk tempo that conveyed a feeling of anticipation.  In response to the beautiful tableau set up by Lewis, the voices of the chorus continued the theme under Scott Tucker’s direction.

Taking the stage in three a cappella selections were the voices of The Choral Arts Youth Choir.  Comprised of talented high school talents, the ensemble sang under the direction of Brandon Straub.  It was wonderful to witness the musical confidence of the young performers, especially in the “Ave Regina” by Cecilia McDowell in which the voices were melodious and created a feeling of sacred reverence.  In contrast, conductor Scott Tucker got the voices of Choral Arts on their feet for “Winter Wonderland of Snow.”  Complete with rhythm section, toes audibly tapped and heads swayed as the nostalgic medley proved to be a crowd-pleasing moment.  The solemn “O Magnum Mysterium” by Morten Lauridsen showcased the rich sonorities of the Choral Arts Chorus as the ethereal motet concluded on a final statement of ‘Alleluia.’  The evening was certainly a live songbook of Christmas favorites.  “Carol of the Bells” by Mykola Leontovych  was one those holiday favorites that everyone seemed know.

A truly tender moment was the Appalachian Carol “I Wonder as I Wander” sung by Kristina Lewis with guitarist Michael Bard.  The beautifully nuanced playing by Bard with the velvety richness of Lewis’ mezzo created a feeling of reflective calm, a much needed quality in such chaotic times.

It was certainly an evening that put the audience in the holiday spirit.   As Maestro Tucker eluded to in his earlier remarks, it was a 90 minute escape from the woes of Washington.  Traditional carols including “The First Noel,” “Silent Night,” “Hark the Herald Angels Sing,” and the famous “Hallelujah Chorus”  united a diverse audience together in joyful song.  With just the right amount of stand alone pieces coupled with holiday classics, the annual tradition ushered in a spirit of goodwill through a night filled with music.