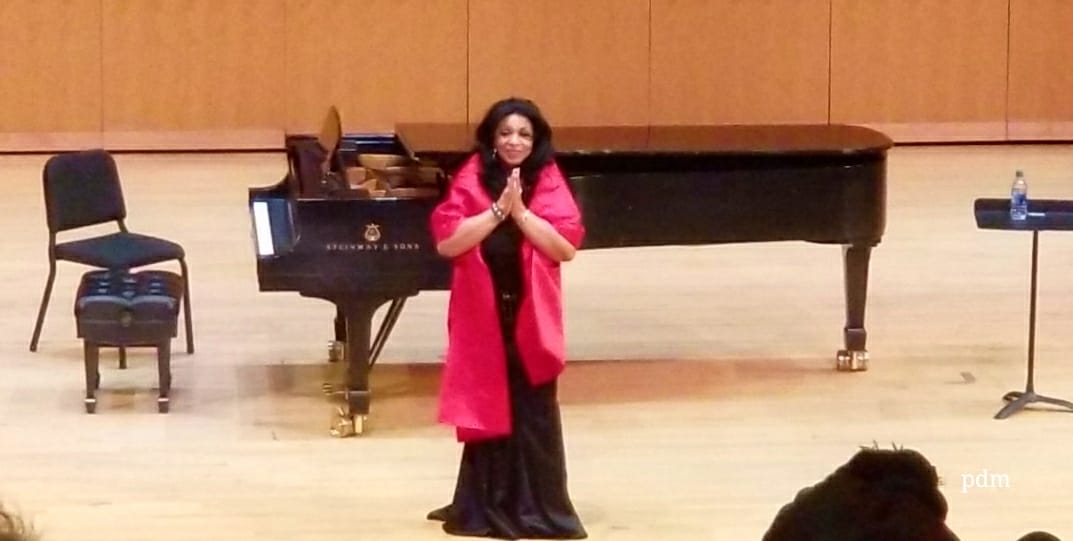 A Legend Returns:  A favorite of The Metropolitan Opera, soprano Leona Mitchell appeared in recital on Saturday evening in Baltimore.

For devout opera fans, the name Leona Mitchell rings a loud bell and for good reason.  The Grammy award winning soprano was a leading soprano at The Metropolitan Opera for 18 seasons.  On Saturday evening, she returned to Baltimore as the guest artist on the David W. Smith Gala held at the University of Maryland Baltimore County in the Earl and Darielle Linehan Concert Hall.  Named for the beloved teacher and musician David Smith, the fifth annual concert raises funds for a scholarship in his memory for deserving music students.

The soprano began her recital with “Dank Sei Dir Herr.”   Thought widely to have been composed by George Frideric Handel, the sacred song by Siegfried Ochs set the perfect tone for the program.  With a stately introduction by pianist Nancy Beith, Mitchell spun a long phrase that bloomed on the first word ‘Dank.”  As the work continued, the complete statement “Thanks be to thee, O Lord” returned in a full warm soprano, marking a personal statement of faith.

With each piece, Mitchell took her time.  Every note and nuance created a musical moment.  That was quite evident in the two songs to follow by Joaquin Rodrigo.  “¿Con qué la lavaré?” was a contemplative song that was captured with a slow, deliberate tempo.  As the soprano conveyed sentiments of cleansing, grief and sorrow, the voice seemed to come into its center, forming an arch for the remainder of the recital to follow.  “¿De dónde venís”  was a contrast in the set, marked by a playful, coquettish delivery by Mitchell with delightful effect.

The program continued with two French songs by Henri Duparc: “Chanson triste” and “L’invitation au voyage.”  In these songs, the listener could truly hear the use of contrasting dynamics.  This was particularly true in “L’invitation au voyage” in which Mitchell was in full command of the long legato phrases.  The accompaniment further enhanced the feeling of excitement as the soprano’s voice soared and then greeted by the piano’s final chord.  Ending the first set was “Passo Pel Prat”  by Joseph Canteloube.  A true tour de force, the dramatic piano matched with the soprano’s clarion delivery provided the big finish for the first half of the recital.

“Song to the Moon” from Antonin Dvorak’s “Rusalka” showed off the lower register of the voice.  With a delicious dark tone, the repertoire staple grew to a big climatic end.  The program began to turn towards a lighter air.  “Je te veux” was in the manner of a playful waltz, with the voice and the piano yielding to the other to take the lead. With the sprightly piano, Mitchell capped the ending in dramatic fashion, much to the audience’s delight.  Next was the famous “Habenera” from Georges Bizet’s opera “Carmen.”  In a personal moment with the audience, Mitchell reflected on memorable times in which her late husband would hear her humming this aria for mezzo-soprano {Carmen} around the house and would playfully remark because she often sang the role of Micaela. It was wonderful to hear Mitchell explore the rich depths of her voice as she delivered the sultry phrases with a molten hue.  Rounding out the set was Cole Porter’s  “So in Love.”  The expressive piano introduction by Nancy Beith created a whimsical atmosphere in which Mitchell’s soprano was able to fully convey the depths of love, especially in the height of phrase “So taunt me, hurt me, deceive me, desert me…”  Together the piano and voice created an emotional pathos with which the audience connected.

A surprise ending to the printed program was the rendering of the final selection, the beloved “How Great Thou” in which Mitchell accompanied herself at the piano.  Several ovations for the revered soprano continued after and led into two encores: the aria, “Io son l’umile ancella” from Adriana Lecouvreur by Francesco Cilea and “Summertime” from the opera “Porgy and Bess” by George Gershwin.

It was a special evening, a remarkable opportunity to experience one of the greatest operatic voices of our time.