REVIEW: The City Choir of Washington Transports the Audience to French Sacred Glory 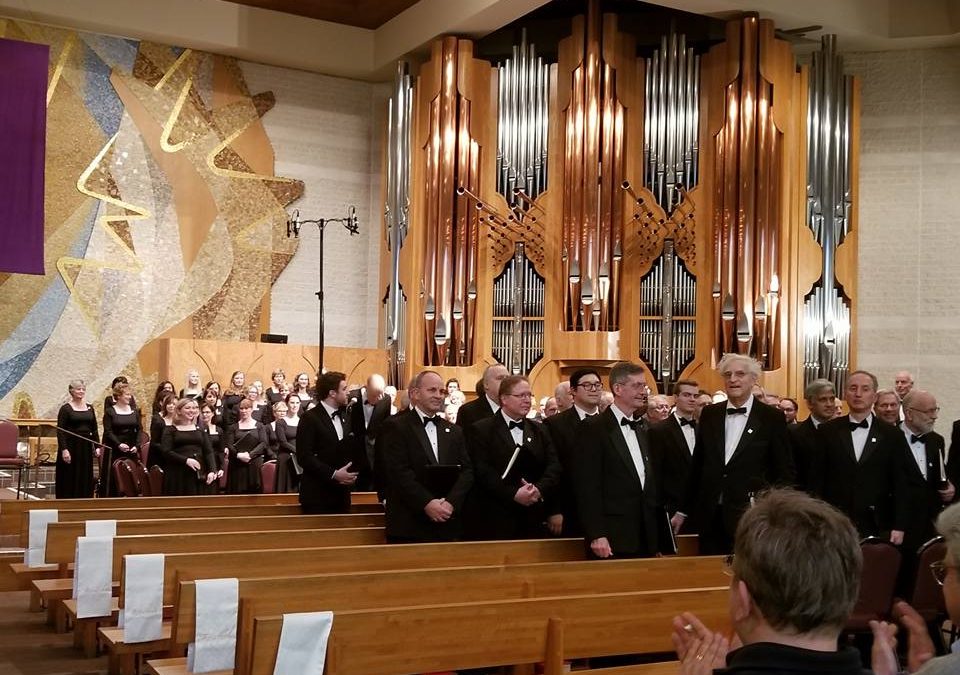 The afternoon of music presented by The City Choir of Washington for many was like spending the afternoon with a dear friend.  People waited an hour in advance in the narthex of McClean’s Saint Luke’s Catholic Church to experience the special concert of French-inspired sacred works by Gabriel Fauré, Maurice Duruflé and Francis Poulenc.  There was a feeling of anticipation and unspoken excitement in the audience as this was Robert Shafer’s first public return to the podium after suffering a serious car accident this past summer.

Opening the program was the beautiful motet by Fauré, “Cantique de Jean Racine.”  Beautifully accompanied on the church’s pipe organ by Paul Skevington, the warm organ stops and lush accompaniment provided the perfect vehicle for the choir’s entrance.  The use of a solo organ stop drew in the listener in preparation for the voices.  This was a wonderful showcase for the male voices, with their initial entrance followed by the women.  Now joined together in full harmony, the voices of the choir responded nicely with Maestro Shafer’s careful gesture.  There was a sense of reverence throughout, leading to the reflective ending of the piece.

A special treat was to hear the Steiner-Reck organ in its solo capacity.  Organist Paul Skevington masterfully played the “Choral in A minor” by César Franck.  The opening phrases gave a flair for the dramatic with the use of the organ’s reed stops with quick, flashy passages.  Contrasting with softer dynamics in the middle, the work moved to a triumphant close to the applause of the audience.  Four motets on Gregorian themes by Duruflé followed.  Perhaps the best known of the four “Ubi Caritas” began the set. “Tota Pulchra es, Maria” was a lovely constrast with the use of the divided women’s voices of the choir.  The famous “Tu Es Petra”  or  ” Thou Art the Rock.” was truly a majestic offering with the voices of the choir full and of a robust nature.  Closing the set was the “Tantum Ergo.”  Marked by the dark intensity of the minor key, the motet ended reflectively on the word ‘Amen” almost like a prayer.  Ending the first half of the program was the “Sanctus” from the Duruflé “Requiem.  As if a chorus of angels, the divided women’s voices of the choir cried out harmoniously in the opening lines with the traditional text ‘Holy.’  Now joined by the men and the full grandeur of the organ, the repeated “Sanctus” soared into the climatic phrase ‘in excelsis’ or “Glory to God in the Highest.”  What a glorious ending this was to the first half of the program, leaving the audience wanting more. Metropolitan Opera soprano Danielle Talamantes and conductor Robert Shafer bow at the end of the performance of the Poulenc “Gloria.”

Joining The City Choir of Washington for the second half of the program in the “Gloria” of Poulenc was Arlington native and Metropolitan Opera soprano Danielle Talamantes and pianist Peter Uhlir.  Full of wonderfully written harmonies, there was an added element of excitement that marked this portion of the concert.  Shafer led the choir with a bright, stately tempo in the opening ‘Gloria’ chorus.  The playful ‘call and response’ element of the “Laudamus te” created an element of joyfulness throughout.  The thoughtful, supportive accompaniment of pianist Peter Uhlir was certainly crucial to the work and provided the solid momentum on which Maestro Shafer and the voices soared.  Soprano Danielle Talamantes made her initial entrance in the “Domine Deus.”  Even though she was the soloist, there was a sense of ensemble singing that Talamantes brought to the experience.  Her beautifully lyric voice was prominent, but never dominated-giving the impression of a shared musical offering.  The momentum of the work was truly felt in the “Qui Sedes Ad Dexteram Patris.”  With the variety of nuances in the voices, from the solid unison singing to the harmony on the ‘Quoniam’ text, worshipful piece moved towards a momentous ending.  Soprano Danielle Talamantes was in full operatic bloom as she led in response with the choir on the ‘Amen.”  The final ethereal chord of the work left the audience in a momentary trance, followed by rapturous applause.

It was certainly a special evening for many reasons.  Maestro Shafer expressed his gratitude for being able to return to the podium.  “God has blessed be with recovery.”  he expressed earlier in the concert.  There was also a gracious recognition of Maestra Gretchen Kurhmann, music director of Choralis, who led The City Choir of Washington during his recuperation.  We caught up with Kurhmann and asked her about her experience of stepping in for her colleague.  “It was my distinct honor to be asked by ‘Bob’ to cover his season this year after his injury. The chorus was very welcoming and supportive and a pleasure to work with, but all of us are thrilled that he was able to return and is back on the podium where he belongs” she expressed.  In fact, the concert performed of French gems was selected by Kurhmann when it was thought that she would still be at the helm.  Another heartwarming moment was the recognition of his long time accompanist Peter Uhlir, who Shafer referred to as one of America’s leading accompanist and one of his heros with whom he could not do what he does.

So, the afternoon of glorious music was a team effort on many accounts.