REVIEW: The King’s Singers in Concert at Saint John’s Georgetown 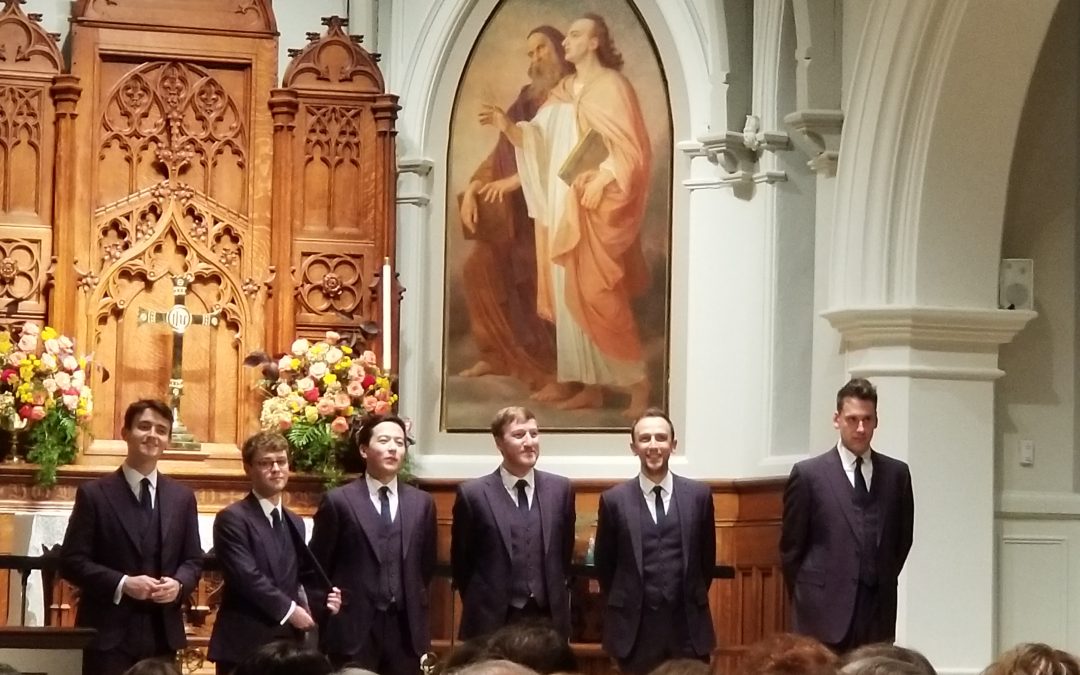 MANY A SPLENDID THING

The King’s Singers performed a love inspired program as a part of the Saint John’s Georgetown Concert Series.

There are many things that may inspire one to sing.  But for even those who may not have a musical voice, the idea of love often conjures a song from within.  That was certainly the case as the line wrapped around the parish hall of the historic Saint John’s Episcopal Church to hear the world renowned King’s Singers in concert.    Noting that appearing again in concert at the Georgetown parish was like a ‘homecoming,’ the feeling seemed mutual as the men’s ensemble performed for a sold-out audience.

Sunday’s program was centered around varying degrees of love.  Whether they were singing about a romantic love, a love lost or the joy of love, the music resonated with the theme tastefully through varying styles and languages.  What was wonderful about the program was the way in which the members curated the evening with thoughtful dialogue about the pieces with the audience.  The listener was made to feel right at home and was brought into the experience.  Beginning the program were beautiful ‘modern’ standards.  “It’s a New World” by Harold Arlen was a sumptuous vocal introduction to the musical gems in store.  Showcasing the ensemble’s tight-knit vocal harmony, the opening selection was marked by a beautifully blended tone.  With the radiance of tenor Julian Gregory, the warmth of countertenors Patrick Dunachie and Edward Button and the supportive depth of the baritones Christopher Brueton, Nick Ashby and bass Jonathan Howard, the idea of a ‘new world’ was highlighted through the varying colors of the voices.   The intermittent vocal solos further punctuated the idea of love being both fresh and new.

Continuing this section were three selections arranged by former member Philip Lawson from the group’s recording “Simple Gifts.”  The traditional tune “I Love My Love” was a musically nostalgic statement, which was readily felt in the tender, lyric lines of tenor Julian Gregory.  Simon and Garfunkel’s “April Come She Will” featured the ensemble like a ‘vocal orchestra’ as the voices supported the main melody of the popular tune with a bell-like percussion effect.  “When She Loved Me” was a reflection on a past love, with the sentiment further enhanced by the expansive, legato lines and lush harmonies creating a sense of longing.

For those who had an appetite for some of the ‘meatier’ vocal repertoire, that was fulfilled as the program progressed.  “Vineta” by Johannes Brahms found the ensemble with a richer, deliciously darker hue, coupled with the lilting movement of the voices.  “Deep In My Soul” by Edward Elgar was a true example of text painting as the opening baritone line perfectly mirrored the text.  With the feeling of swelling and sighing in the voices, there present was the sentiment of conviction from within.  Based on a Japanese text  “Remembered Love” by Jackson Hill was a transportive work.  It was as if the listener was taken back to a past love with the pinpoint precision of the voices, all to an otherworldly effect.  The joyful bounce felt in  “Au joly jeu”  French madrigal style by Renaissance composer Clément Janequin was a welcomed contrast to the previously reflective selection.  Rounding out the first half of the concert were three selections by Orlandus Lassus, ranging from the urgency felt in “Im Maven” to the playfulness of “Chi Chilichi.”

After the intermission, the ensemble returned with a few more gems to round out the program.   “Toutes on mun kultani” arr. by Bob Chilcott was a serenely beautiful way to open the second half of the program.  A delightful turn in the program was the offering of the Civil Rights staple “If I Can Help Somebody.”  Arranged by Stacey V, Gibbs, this was sung with an endearing quality, this song was like a musical extension of healing from the stage to the audience. Tenor Julian Gregory brought a soulfulness to the selection that transcended race and was readily felt.  One can not help to acknowledge the fervent bass of Jonathan Howard, whose voice was consistently present, yet well-blended within the ensemble.

Bringing the evening to its close were classic settings of popular favorites such as “And So It Goes” by Billy Joel and “Seaside Rendezvous” by Queen.

The famed ensemble was rewarded with rapturous applause and the audience did not want to let them go.  A program themed around a much needed ingredient: love was just what the doctor ordered.

NEXT UP ON THE SAINT JOHN’S GEORGETOWN CONCERT SERIES: