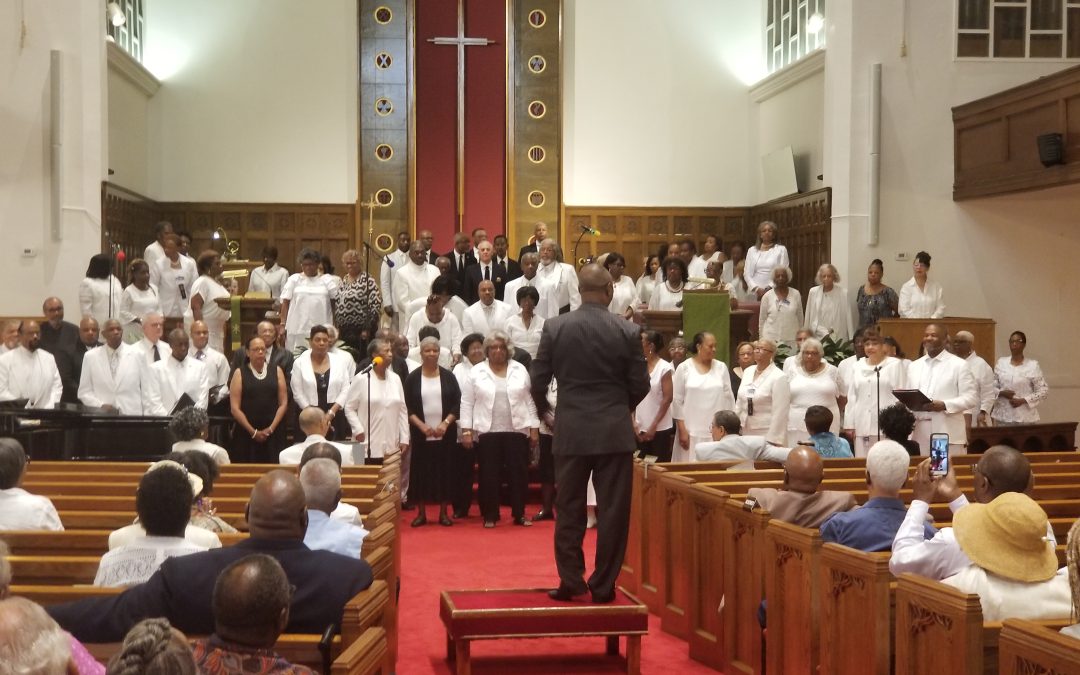 SING PRAISES:  The voices of The Thurston G. Frazier Memorial Chorale, The Asbury United Methodist Church Combined Choirs and The Senior Choir of Shiloh Baptist Church elevated a best-kept facet of the black church music experience on Sunday in a special concert held at the historic church.

This week, The Gospel Music Workshop of America, Inc. descended upon our Nation’s Capitol for a series of concerts, workshops and classes celebrating and elevating the presence of gospel music within our nation’s church’s as well as the recording industry.  One of the best-kept secrets of the conference is the Thurston G. Frazier Memorial Chorale, which continues to present a wide variety of repertoire, including anthems, spirituals and gospel.  In response to Frazier’s death in 1974, it was James Cleveland who  renamed the then Alumni Chorale in memory of his friend.

Watch and listen to the chorale sing a beautiful setting of “Take My Life and Let it Be” by Garnett Mowatt, with local favorite, soprano Francese Brooks:

The program on Sunday at Asbury United Methodist Church was certainly spirit-filled.  From the swelling of the full church of voices with organ in the hymn  “Great is Thy Faithfulness” to the rhythmic pulse of the percussion:  the sacred music experience was certainly appreciated at a high level.  After selections performed by the chorale, the choirs of Asbury prepared by Everett P. Williams, Jr. and Stephen F. Key and The Shiloh Senior choir directed by Thomas Dixon Tyler rounded out the program.

DC musical statesmen Thomas Dixon Tyler and Everett P. Williams, Jr. truly set the bar as they led their choirs with musical precision and spirit.  Of special note is the masterful organ accompaniment provided by the inimitable Evelyn Simpson-Curenton, which was especially prevalent in the anthem “Hymn of Consecration” by Marvin V. Curtis, rendered by The Shiloh Senior Choir.

Ending the program were the combined choirs: The Thurston G. Frazier Chorale, Asbury and Shiloh joined together in the powerful ministry of the classic “God is”” by Robert J. Fryson.  Though this year marks the 25th anniversary of his passing, this milestone further illumines his rich contributions to the gospel music canon and his presence.

Watch the Combined Choirs in “God Is” by Robert Fryson with M. Roger Holland, II as soloist.

GMWA runs in DC through August 2.  For more information about how you can participate, CLICK HERE