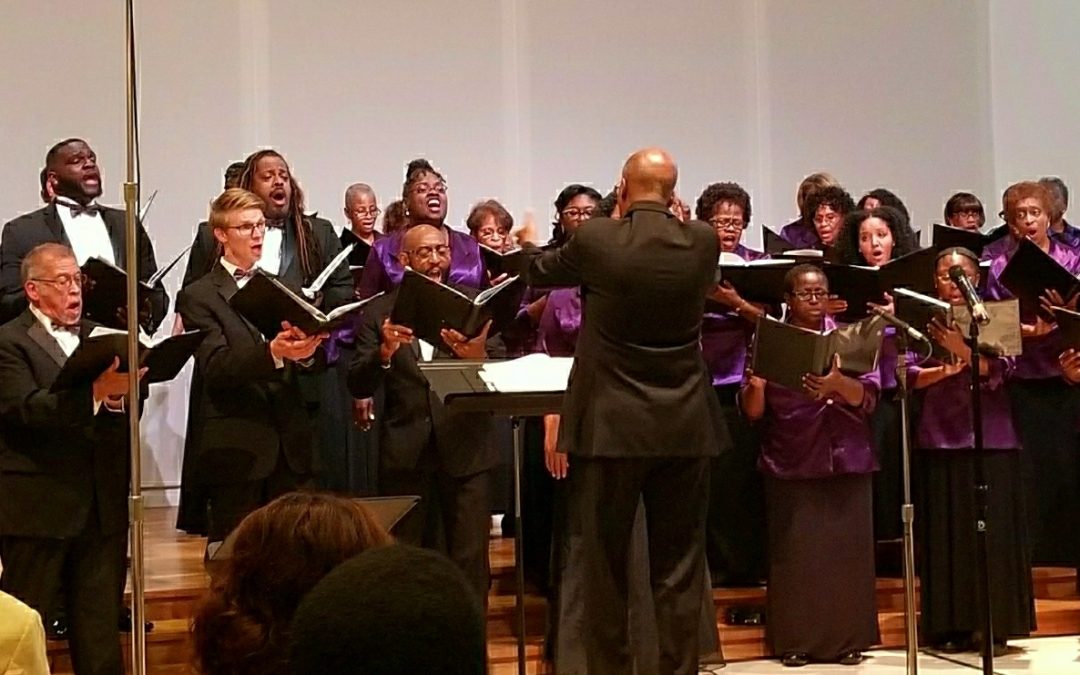 “When we know where we’ve been, we know where we are going” was the sentiment parenthetically speaking as The Heritage Signature Chorale’s executive director Dana Anderson addressed loyal supporters, friends and members of the media at Saturday’s pre-concert open house. This event allowed those present for the chorale’s 19th anniversary concert the opportunity to hear about the many accomplishments of the organization. One of the standout achievements noted is the fact that founder and artistic director Stanley J. Thurston has led the singers in 19 seasons with uninterrupted service to the community. Towards the end of the event, Thurston shared with those gathered a new direction in which the Heritage Signature Chorale will venture. Not only will audience members get to hear the chorale, but the organization will embark on smaller breakout ensembles, which were heard in the evening’s concert. Probably the only African-American symphonic choir in our Nation’s Capital, this concert gave wide range of the choral repertoire and was a snapshot of its musical history.

Often more than not, spirituals or gospel selections are programmed at the end of a ‘formal’ concert. It was a refreshing experience for this listener to experience the spiritual right at the beginning of the program. Conducted by Maestro Thurston,“Rock-A My Soul” by Uzee Brown began the evening and set the energetic tone. Filled with the buoyant, lilting voices of the men in particular, the motion of the work truly put the audience in the mood. The strong trio of soloist: soprano Leila Gheitu, mezzo-soprano Jennifer Lee and bass Richard Glover were on display in compliment to the voices of the chorus. “Jeremiah’s Fire” by Rollo Dillworth followed.  An homage to the late composer of spirituals, Moses G. Hogan, the chorale executed the driving passages of this work with a quick, lightening pulse. Chorus member Adriene Banks lent her exuberance she marked the pulse of the work with the sole accompaniment of the tambourine. The momentum of the audience’s excitement quelled the bonus effect of the piece’s ending, which is a sharp whisper of “Fiyah.” With applause covering that nuance in the reverberant space, is was almost missed altogether. Maestro Thurston asked the audience basically if they noticed the ending. He then asked the chorale to repeat that section leading up to the same spot. With the same result, the audience could not wait to applaud. It was a moment that added a bit of levity and comedic relief to the sometimes ‘stuffy’ concert setting.

Then, the program took an emotional turn with the pathos found in Moses Hogan’s arrangement of “Jesus Lay Your Head in the Window.” As this listener experienced this spiritual, it was like that of a conversation: a reverent expression involving three persons. Likening it to the Trinity, flautist Saȉs Kamalidiin began with a mournful, unaccompanied flute solo that set the reverent emotion to be conveyed forthcoming. Mezzo-soprano L’Shauntee Robertson-Johnson began to sing the opening lines “Jesus Lay Your Head in the Window.” With a wide range of tonal warmth, complimented by a sense of emotional depth, there was a sacred countenance that continued.  Pianist Maxwell Brown’s piano accompaniment provided the foundation on which the musical forces rested securely.  The seraphic, soaring quality of soprano Francese Brooks floated above the melancholy of the chorus. Ending in a dark minor key, the spiritual brought the listener to a place of contemplation. The first half of the concert ended like it began, with a spiritual “My God is Rock.” by Ken Berg. With the voices of the choir rhythmically anchored in the driving pulse of the work, rendering brought this section to a rousing end, greeted by the applause of the inspired audience.

As mentioned in the pre-concert talk, after the intermission, the second half of the concert gave the audience and opportunity to experience the “breakout” groups of the organization. In ‘Stanley and Friends” Thurston traded his baton for a seat at the piano and was joined by soloist Loree K. Slye (who he met during their time at Morgan State) bassist Percy White and percussionist Rick Slye. Now figuratively transforming the experience to an intimate jazz club, the sultry, intuitive delivery by the golden toned voice of Slye was complimented by her colleagues. ‘Thurston and Friends’ shined in two jazz standards: Strayhorn’s “Lush Life” and “Guess Who I Saw Today?” by Murray Grand.

Over the years, The Heritage Signature Chorale has made a commitment to showcase both local and emerging artists. That aspect truly was on display as the professional soloists on the DC scene and members of the chorale were prominently featured as the symphonic chorus presented highlights from Gershwin’s opera timeless“Porgy and Bess.” Fresh from a performance at the National Orchestra Institute, this section was certainly the crowd-pleaser. Soprano Francese Brooks led the mourners as her hovering, yet declamatory soprano shared the news of Robbins’ death. Then, the heart-dropping moment was when soprano Yolanda Bryant sang the aria “My Man’s Gone Now.” With a soprano that dug deep into the emotion of loss, Bryant’s voice finally ascended emphatically to a place of lament. In full dramatic effect, Bryant’s embodiment of Serena’s reaction was felt powerfully by the audience, who accorded her rousing applause. Not to be outdone, tenor Wayne Jennings owned the room as he rendered “It Ain’t Necessarily So.” As the outlandish Sportin’ Life, Jennings literally had the audience in stitches as he took on the character. Coupled with vocal presence and comedic flair Jennings brought down the house.

“Oh Lawd, I’m On My Way” sung by the full company brought the milestone evening to its close.

How appropriately so as the chorale moves into a new season of exciting programs.

A native of Petersburg, VA, Patrick holds a BM in Vocal Performance from Virginia State University and a MM in Church Music from Shenandoah Conservatory.  Formerly the Performing Arts Columnist for Washington Life Magazine, he currently is a freelance writer, publishing articles for several noted publications, including The Washington Post, Early Music America Classical Music Voice North America, The Afro-American Newspaper, CBS Washington and Examiner.com.  He is a member of the Music Critics Association of North America, National Association of Negro Musicians, Inc., a member of the Shenandoah University Alumni Board of Directors and a Life Member of Alpha Phi Alpha Fraternity, Inc.  He serves as Organist/Choirmaster at Saint John’s Episcopal Church, Zion Parish in Beltsville, MD. Visit http://www.patrickdmccoy.com