The Voices of Choral Arts, Washington Performing Arts Men, Women and Children of the Gospel Resound in Annual MLK Tribute 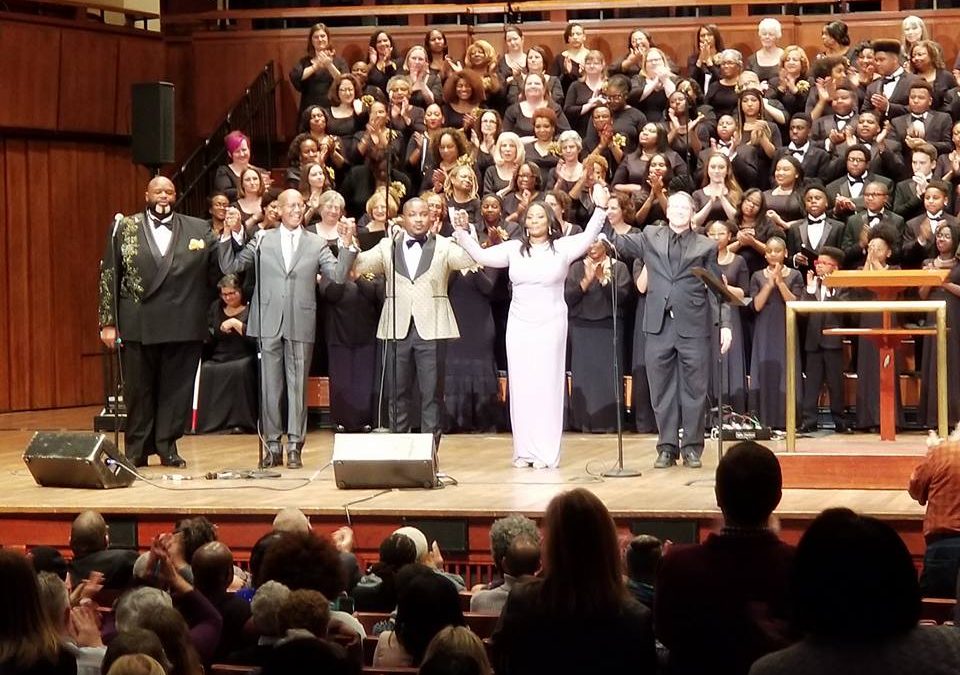 LIFT EVERY VOICE:  Since its inception by Choral Arts founder, the late Norman Scribner, the annual choral tribute to MLK continues to lift hearts and voices together in song.

There are perhaps only a few times that the tapestry of diversity is readily witnessed in one audience at The Kennedy Center.  The 2019 choral tribute to Dr. Martin Luther King, Jr, a co-presentation by The Choral Arts Society of Washington and Washington Performing Arts is certainly one of those hallmark moments.  People from a myriad of backgrounds once again packed The Kennedy Center Concert Hall for an evening of music celebrating the legacy and vision of one of world’s most celebrated Civil Rights icons.  At the center of the celebration was the honoring of The Rev’d Dr. Elbert Ransom, Jr. with the CASW 2019 Humanitarian Award.  Ransom enjoyed a close relationship with the King Family and continues to exemplify and bare witness to the spirit of Dr. Martin Luther King, Jr.

In that spirit of unity, the combined voices of Choral Arts and the Men, Women and Children of the Gospel under the leadership of Michele Fowlin (artistic director of Children of the Gospel) opened the program with “Thy Name be Praised” by James Glover.  Full of energy, Fowlin led the aggregation of voices with a burst of energy that permeated the hall, hence setting the tone for the program to come.  The rhythmic percussion and the sparkling piano accompaniment further enhanced the uplifting nature of the piece.

After a generous introduction by Fowlin, Choral Arts artistic director Scott Tucker took the stage to lead the voices of Choral Arts in the spiritual “My Soul’s Been Anchored in the Lord” by Moses Hogan.  The spirited arrangement found a home on stage with the ensemble as they gave it their all.  Usually, the focus is on the thrilling high notes present in a choir, but it was the basses that really conveyed the sentiment of the spiritual, ‘digging down deep’ into the choral core.

Picking up the tempo was artistic director of the Men and Women of the Gospel Theodore Thorpe, III.  With his charismatic delivery, inviting the audience to join in on the experience, there was a sense of conviction as the soloist and choir declared “God Said It, I Believe It.”  A nice contrast to the program was the highlighting of the combined men’s and women’s voices in specific pieces. Beloved WPA artistic director emeritus Stanley J. Thurston took the stage to lead the women’s voices of of Choral Arts and Women of the Gospel in the spiritual “Hold On” arr. by Jay Broeker.  Similarily, Theodore Thorpe, III returned to lead the combined men in Stacey V. Gibbs’ arrangement of  “My Good Lord’s a Done a Been Here.”  In both instances, it was quite moving to see the members of the choir joined together as brothers and sisters in song.

A perennial favorite at this concert is the presence of legendary pianist and gospel artist Ralph Alan Herndon.  Herndon who was a favorite of Choral Arts founder Norman Scribner, remains a welcomed presence on the program each year.  His presence this year was in particular special as Choral Arts conductor Scott Tucker led the combined voices with Herndon at the piano and as soloist in “If You Just Hold Out.”  This provided the perfect segue into the special presentation to the Rev’d Dr. Elbert Ransom, Jr.  Dr. Ysaye M. Barnwell who received the award in 2014 presented Ransom the award.  In his remarks, Rev’d Ransom expressed his deep appreciation for the recognition and informed the audience that we were “under the sound of a voice that had seen that and done that”  to resounding applause.  At the center of his remarks, he also made reference to John 15:15-“ I no longer call you servants, because a servant does not know his master’s business. Instead, I have called you friends, for everything that I learned from my Father I have made known to you.”  What appropriate words as he further gave special recognition to his dear friend Ralph Herndon and was book-ended with a beautiful musical tribute in song “A Few Good Men” which poignantly punctuated the moving moment.  Ending the first half of the concert was the combined choirs led by Scott Tucker in a stirring arrangement of the hymn “It is Well With My Soul”  by Phillip Carter.  With the rich alternation between the women’s and men’s voices the familiar melody soared as the voices raised from one harmonic progression to the next, resounding  in resolute triumph!

After the intermission, the Children of the Gospel took the stage under the direction of Michele Fowlin in two stirring selections.  “Let Everything that Hath Breath” embodied the element of praise, with the singers fully engaged.  Resonant voices couple with full involvement of expression elicited the applause of the audience.  Likewise, guest soloist and Children of the Gospel alumna Annisse Murillo offered a stirring solo in “Use Me/Fight On.”

As the evening continued, the combined choir offered a range of spirituals, contemporary classics and rousing gospel numbers that gave the capacity audience a performance marked by inspiration.  One of those moments came in the moving piece “Heal Our Land” by Oscar Williams, featuring guest soloist Monique Steele Griffiths.  With the full voices of the combined choirs under the direction of Theodore Thorpe, III, Griffiths soprano voice soared.  The contemporary anthem of reconciliation and healing was almost like a perfect partner song for the preciously heard “There is a Balm in Gilead” by Dawson led by Stanley J. Thurston, which was sung with equal conviction.

Sending the audience out was the MLK favorite “If I Can Help Somebody.”  What an amazing annual event that continues to inspire and bring the community together.