CHANGING SEASONS: The City Choir of Washington Announces the Retirement of Robert Shafer 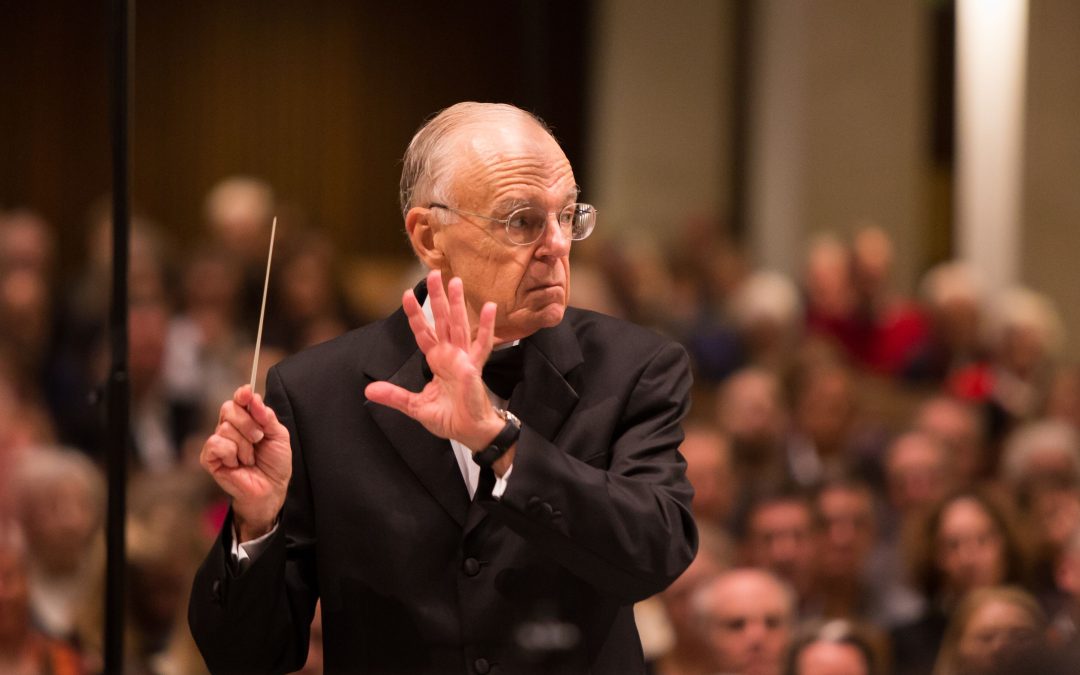 After many years leading The City Choir of Washington, which he founded in 2007, the retirement of the esteemed conductor, composer and educator Robert Shafer was announced this week. The esteemed conductor and composer Robert Shafer has been an integral part of the musical vanguard of the DC choral scene.  From its earlier days as The Oratorio Society of Washington to now The Washington Chorus, Shafer led the Grammy Award winning chorus from 1972-2007.  Turning 75 in 2021, he has served as The City Choir of Washington’s Artistic Director since 2007.  During his tenure as Music Director of The Washington Chorus, he was honored with a Grammy Award for Best Choral Performance (2000) for a live concert recording of Benjamin Britten’s War Requiem.   That excellence continued with his founding of The City Choir of Washington to which he has led to critical acclaim.  Additionally, he prepared the Washington Chorus for the Grammy Award-winning recording of John Corigliano’s Of Rage and Remembrance with the National Symphony.

Considered one of the great choral founders of Washington, in 2010 The Washington Chorus honored him as such at a special reception at The Embassy of France.  He was recognized with his other esteemed colleagues, which included Tom Beveridge, the late Paul Callaway, Joan Gregoryk, the late Paul Hill, the late Jack Langstaff, Joyce Garrett, Bernice Johnson Reagon and his two dearly departed friends and colleagues the late J. Reilly Lewis and Norman Scribner respectively.   In similar fashion, the Choralis Foundation awarded Shafer with a Choral Excellence Award.  Under his direction, The City Choir of Washington commissioned and performed the world premiere of Sir John Tavener’s “Three Hymns of George Herbert” and “Tolstoy’s Creed” at the Washington National Cathedral in April 2013, with the composer in attendance.

“Bob Shafer is one of America’s most distinguished choral conductors, and he has been a pillar of the DC choral community for more than 50 years. Bob has made enormous contributions to help transform our city into the ‘Choral Capital’ of the United States,” said Benjamin Tsai, President of the City Choir of Washington. (Arts Journalist and Shenandoah Conservatory Alumnus Patrick D. McCoy congratulating Maestro Robert Shafer in 2013 after the premiere of works by Sir John Tavener by The City Choir of Washington at Washington National Cathedral in the presence of the composer. (FILE PHOTO)

Shafer, who will turn 75 in 2021, has served as the City Choir’s Artistic Director since 2007. Shafer was the Music Director of the Washington Chorus for more than 35 years. In 2000, he was honored with a Grammy Award for Best Choral Performance for a live concert recording of Benjamin Britten’s War Requiem. Shafer prepared the Washington Chorus for the Grammy Award-winning recording of John Corigliano’s Of Rage and Remembrance with the National Symphony. In 2011, the Choralis Foundation awarded Shafer with a Choral Excellence Award.

Shafer is also a noted composer. In December 2019, his composition, “Sweet Was the Song the Virgin Sang,” was performed in a televised concert at the National Shrine of the Immaculate Conception. A dedicated and celebrated teacher, Shafer started his conducting career in 1968 at James Madison High School in Vienna, Virginia; he was professor of music at the Conservatory of Music at Shenandoah University from 1983 until his retirement in 2016.

Reflecting on his career as a musician, Shafer said he has strived “to create beauty and give our audiences an escape from our deeply troubled world and a vision of a new world truly at peace and filled with love.”

COVERAGE OVER THE YEARS

“Fit for a Royal”  A review featured in Washington Life Magazine